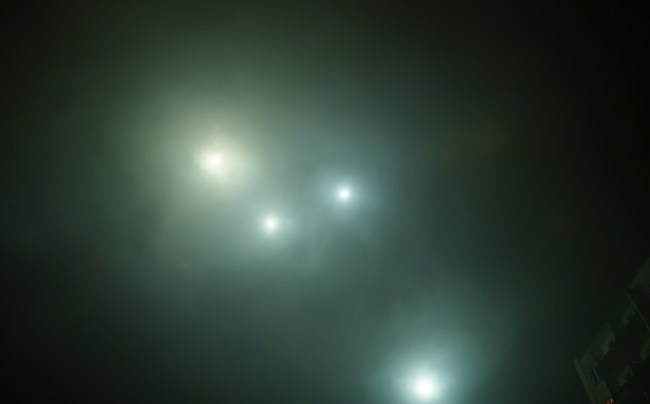 Newly leaked video footage purportedly shows red-flashing UFOs swarming a U.S. Navy combat ship in the Pacific Ocean. The eye-opening video corresponds with the previous radar footage that was released earlier this month of 14 UAPs flying near the USS Omaha in July 2019.

The newly surfaced footage was apparently taken by “on-board ‘VIPER’ TEAM (Visual Intelligence Personnel)” on July 15, 2019, from the deck of the USS Omaha between 9 p.m. and 11 p.m. PST, according to Jeremy Corbell, the filmmaker behind the UFO documentary Bob Lazar: Area 51 & Flying Saucers. The footage was reportedly taken while the ship was in a “restricted warning area off San Diego.”

The 14 unidentified flying objects with flashing red lights traveled from speeds of 46 mph to 158 mph.

“The most impressive evidence we witnessed was their endurance,” a crewman of the USS Omaha allegedly said of the UAPs in the video. “The event lasted over an hour with all contacts just disappearing. We were never able to discern where they departed to.”

“In the end I’m 50/50 that it is man-made tech from somewhere,” a USS Omaha servicemember said. “Either way it’s world changing. Because of the incredible energy capacity of the crafts.”

Corbell writes, “These UFOs were NOT inconspicuous… they were brazen; boldly buzzing our warships. To many involved, it stands to reason that the UFOs (their operators) WANTED to be seen and recorded.”

Corbell claims that the UFO sighting ended with one of the Unidentified Aerial Phenomena crashing into the water, but no wreckage was found despite at least one U.S. Navy submarine searching for the vanishing craft.

The latest UAPs footage arrives a week after the U.S. government released its report on UFOs, but wouldn’t commit to saying if the UAPs were special aircraft from one of our enemies or if it was aliens flying a spacecraft. The government was unable to explain 143 of the 144 mysterious UFOs, except for a large, deflating balloon.