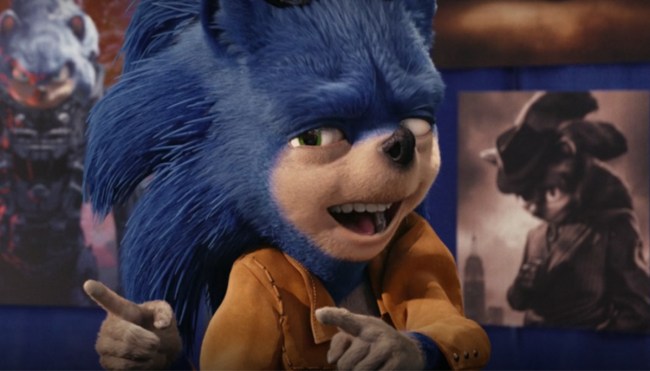 In April 2019, the world got its first look at the Sonic the Hedgehog movie that was supposed to hit theaters on November 8th of that year.

However, that release date was ultimately pushed back close to three months thanks to the tsunami of negative criticism that formed in the wake of the trailer’s debut.

Fans of the beloved blue hedgehog were not shy about voicing their displeasure with the character’s design (with most of them taking issue with the decision to give him human teeth), and it didn’t take long for director Jeff Fowler to announce he and his team were literally going back to the drawing board.

Thank you for the support. And the criticism. The message is loud and clear… you aren't happy with the design & you want changes. It's going to happen. Everyone at Paramount & Sega are fully committed to making this character the BEST he can be… #sonicmovie #gottafixfast 🔧✌️

Thankfully, it all worked out in the end. Fans had their fears assuaged when a trailer featuring the updated Sonic dropped in November, and the film ultimately took home over $300 million at the global box office and spawned a sequel that’s grossed even more since hitting theaters this April.

Based on the initial reception, it wasn’t too much of a stretch to assume we’d seen the last of that infamous original iteration of Sonic. However, viewers who decided to check out Chip ‘n Dale: Rescue Rangers after it dropped on Disney+ last week got one hell of a surprise after a character officially dubbed “Ugly Sonic” made an unexpected cameo.

The movie (which more than a few people have described as a spiritual successor to Who Framed Roger Rabbit) is packed with easter eggs and features an overwhelming number of appearances from (and references to) iconic animated characters.

However, it’s safe to say none of them have managed to generate more hype than the Ugly Sonic cameo. In addition to his wholly unexpected appearance in a Disney property (director Akiva Schaffer went out of his way to thank the lawyers who were able to convince rival studios to allow their IP to appear in a House of Mouse project), Ugly Sonic is voiced by the incomparable Tim Robinson of I Think You Should Leave fame and plays a surprisingly instrumental role in the movie’s plot.

It’s safe to say the internet ate up every single second of the character’s screen time (warning: light spoilers ahead).

Ugly Sonic Cameo is on the same level as Tobey Maguire Cameo 😂 pic.twitter.com/ygOoaaWDYX

You know what's crazy about this cameo? Aside from Disney's lawyers able to get the negotiations to make this cameo happen, the animation studio MPC who did the Sonic+Sonic 2 also worked on Chip N Dale and were actually able to dig up the original Ugly Sonic Model for the movie https://t.co/qcJ2bendtr

I still cannot get over that Ugly Sonic actually plays a pivotal role to the story in the Chip and Dale movie pic.twitter.com/nZBHd33Ne9

I want more of Tim Robinson as Ugly Sonic pic.twitter.com/cxvLCwFn6I

can we get Ugly Sonic: Uglier Crimes on Disney+

That’s one hell of a redemption arc.