Is Uncle Sam Trying To Get Us All On The Wagon? 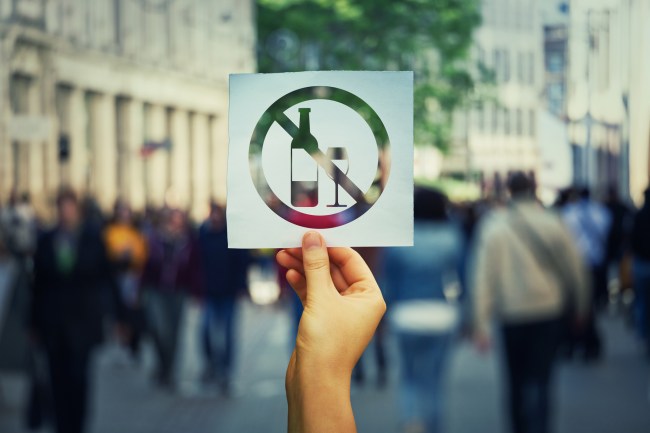 Whether you realize it or not, there is a heaping load of caca brewing in the good old U.S. of A right now that stands to dominate, decimate and destroy one of the only reasons some of us have left for getting up in the morning. No, it’s not sitting around in a pair of dirty underwear playing video games all day while some baffled scientist named Lars scratches his balls and tries to figure out how to cure the Rona. It’s Drinking. Remember drinking? Sure, you do. Your fathers probably did it with so much enthusiasm that you were born prematurely and with approximately fifty fewer I.Q. points than you should have had if your mother made better choices. It’s that one activity that brings us all together, makes all of our dull and drab lives seemingly tolerable, and it even helps some of the ugliest bastards find love in all the wrong places.

Alcohol is a beautiful thing, it really is. Without it, who knows what kind of shape the nation would be in? We may never truly understand the meaning of guilt or regret, left to just float aimlessly in this meaningless existence like a bunch of dopey-eyed derelicts thinking we’ve got it all figured out. But the booze, well, it makes us honest people, holding us accountable for all of our jacked-up indiscretions, questionable sex partners and it gives us an argument for second chances.

Still, the federal government doesn’t see it that way. Nope, they just keep chiseling away at our drunken culture, presumably in an effort to lift up a downtrodden America and show them that we’re all okay. Because everyone has to be okay these days. It’s all part of the long con that’s been slowly sissifying America for decades. It’s the one that doesn’t want us smoking anymore, the one that strongly advises against consuming processed foods or eating anything past 8 o’clock.

But wouldn’t you know it, Uncle Sam has found another way to make us miserable. The 2020 Dietary Guidelines Advisory Committee is requesting that we limit our alcohol consumption to one measly drink a day. It used to be that the average man could knock back two brews in 24 hours and not deteriorate into a beer-bellied beast in the advanced stages of liver failure, but those days are long gone. Now, it’s one, and they’re talking about making this the new U.S. standard.

Whatever the reason, health officials say we’ve got to cut back.

“The fact that most existing evidence indicates increased risk of all-cause mortality among men drinking 2 drinks per day compared to 1 drink per day, and the possibility that no protection exists for low volume drinking on (cardiovascular disease), changing recommended limits to 1 drink daily for men is justified and should be strongly considered,” the report reads.

Listen, I’m not sure what happened to the poor children that eventually grew up, got jobs with these government health agencies and felt the need to start telling people what to do. I’m guessing they were raised on too much Teletubbies and beet juice. But hey, I’m not trying to be complicated. I’m all about making healthier choices, getting into shape, and creating new habits to survive on this planet for as long as possible. And it’s not for my kids either. Hell, THEY are on their own. I’m just trying to dodge this death thing because, unlike around 70% of the nation, I do not subscribe to any crackpot philosophy that makes me feel better about the prospect of not breathing.

That’s just the perils of wallowing in nihilism.

But we all can’t be perfect portraits of fitness, not if we want to stay sane. Hate to break it to you, Uncle Sam, but while some Americans might be able to get by on one or two drinks a day, some live in the abscesses of society. They have loud-mouthed old ladies, bratty kids and crap jobs that pay somewhere between minimum wage and jack shit, and they’d make this nation an even more hellish farce if not for having a few beers a day. Now is not the time to be telling a country of broken men that they need to curb their drinking. It’s certainly not the time to ask them to cut back in the interest of their health and wellness. We’ve already pawned off that part of our eternal soul to combat the economic goblins that have been ransacking our bank accounts since Spring. We’ve exhausted all of our options, tried and tried again, and now we’re back to the tit of Saint Augustine of Hippo, and maybe for good this time. We now live by a new motto:

In Hedonism We Trust.

Still, this is a bizarre era where no one gets left behind. Uncle Sam and his hippy-dippy cronies are concerned about the 5 percent of the drunken population (roughly 16 million people) who are considered heavy drinkers, those who “consume an average of more than 14 alcoholic drinks per week.” The fear is that these people are more at risk of suicide, interpersonal violence and fucked up kids. It’s the reason the report recommends the one drink maximum become the national standard. The hope is that the Departments of Agriculture and Health and Human Services will adopt the new limit as gospel before drafting its 2020-2025 dietary guidelines.

If it does, what will change?

Absolutely nothing, folks. It’s merely a guideline, and as we have learned over the past few months, Americans don’t do well when it comes to following guidelines — especially not those laid out by the federal government. Nice try, Uncle Sam, but you’re not going to get us all on the wagon – not just yet. There’s still too much wasted youth out here, and they aren’t going to be told what to eat, drink, smoke, or screw. And they’re damn sure not about to become caged, sober animals simply because a few fuddy-duddies in white coats think that they should. Booze is just a way of life. It does nothing to sit around whining and crying because we or someone close to us let it obliterate our chances of getting into a good college, having a successful career, or looking like Abercrombie models. We make our own freedom. And if you really want to hear it ring, well, step inside any watering hole around the country at 5pm. But wear a mask, damnit!