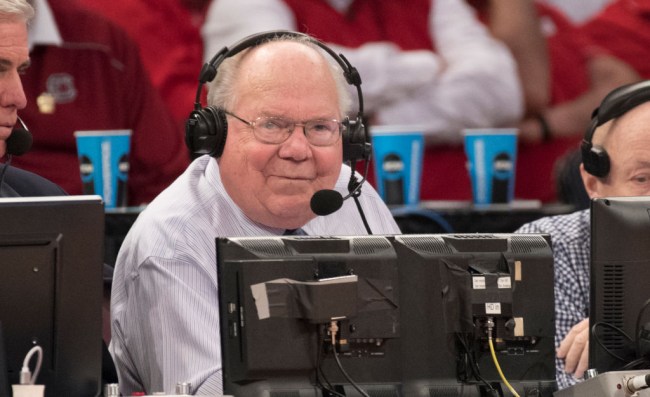 Maybe your first thought when you hear the name Verne Lundquist is SEC football on CBS, or perhaps your mind immediately goes to the Par 3 16th at Augusta National. But if you’re more of a comedy person you may know Lundquist for his short yet memorable role in ‘Happy Gilmore.’

The Adam Sandler classic hit theaters 24 years ago, but Lundquist says he still often gets stopped by people asking him about his appearance in the movie and more specifically to utter the famous ‘who the hell is Happy Gilmore’ line.

Mark Heim at AL.com recently interviewed the legendary broadcaster and the two discussed the movie among many other things. Lundquist explained that college kids used to stop him at games all the time to repeat the line, but one story involving his scene in the movie stands out above the rest.

Back in 2005, Lundquist was at a North Carolina basketball practice ahead of the Tar Heels game at Arizona. Once practice was over, a player walked up to Lundquist and simply said that the team wanted him to come over and say a few words. Lundquist explained that he was a bit caught off guard, but all the players were after was a laugh.

“I followed the kid back down the court and all of them were laying on the floor and doing exercise. I stood right above one of the players and he said, “OK, give us the word. Give us the line from Happy Gilmore.”

“I knew immediately what he wanted. I cupped my hand over my mouth and said, “Who the Hell is Happy Gilmore?” And, good Lord, they started laughing. I said to them then, if you guys win the national championship, I expect a shout out for giving you the first motivational speech of the year. They won the national championship, and I didn’t get a shout out. I’ve been bitter ever since.”

It’s quite the career Lundquist has put together, not only is he a legendary broadcaster but he’s also accomplished the goal of having an all-time great movie line in one of the greatest sports comedies ever.

Related: We Ranked The 3 Greatest Golf Movies Of All Time