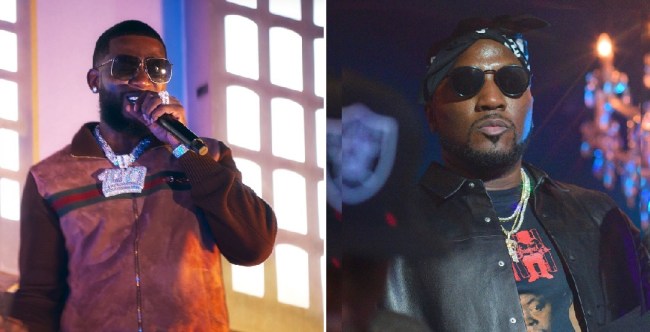 Things got pretty tense during the much anticipated Gucci-Jeezy battle on Thursday night.

In the middle of the Verzuz battle Gucci bragged about killing Jeezy’s friend Pookie Loc which led to Jeezy to stop the battle for a minute so that they can he give a speech about how they were there for the culture and not to beef.

“PUT THAT NIGGA IN THE DIRT” , “SMOKING ON POOKIE LOC” , “PUT SOME MORE IN A CAKSET AN SEND EM RIGHT BACK TO YOU” nahhh GUCCI a wild boy 😭

Back in 2005, Jeezy associate Pookie Loc and three other men broke into Gucci’s home and allegedly began attacking him. As the story goes, Gucci shot Pookie Loc before the men fled. Pookie Loc was later found dead at a nearby elementary school and Gucci was charged with Loc’s murder, but the charges were later dropped because the state felt there was insufficient evidence to prosecute him.

Gucci just wanted to tell Jeezy to his face that he killed his friend. That must be the only reason he accepted this

It seems like things had settled down by the end of the Verzuz battle as the two sang “So Icy” together to close the stream.

Gucci and Jeezy end the battle by performing “So Icy” ❄️ #VERZUZ pic.twitter.com/eRrvXCkHSb