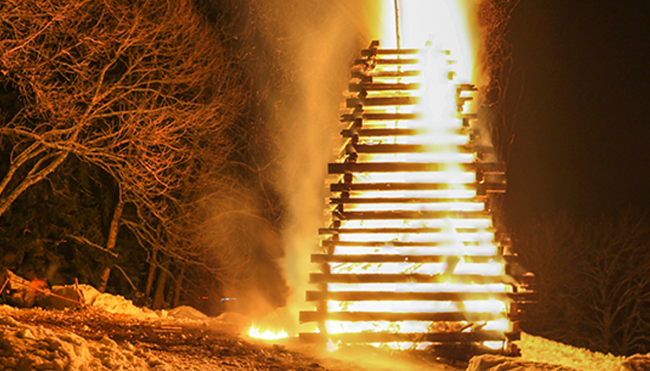 If you pulled a Family Feud and asked 100 random people to use one word to describe your typical funeral, I highly doubt the word “badass” would garner enough votes to end up making an appearance on The Big Board (and I can’t even imagine how Steve Harvey would react if someone threw that out as an answer while he was going down the line.)

However, if you traveled back in time and surveyed the same number of Vikings, there’s a good chance a solid chunk of them would use the Old Scandanavian equivalent of that descriptor to sum up the essence of the traditional, flame-centric sendoffs they used to follow the will of the god Odon, who stated “all dead men should be burned, and their belongings laid with them upon the pile, and the ashes be cast into the sea or buried in the earth” in Heimskringla, which is one of the primary texts that serve as the basis for Norse mythology.

The Vikings interpreted this order in different ways, as the deceased were frequently laid to rest inside a boat that was subsequently lit on fire (in popular culture, these rites often involve someone firing an arrow at the vessel to ignite the flames, but in doing so, you risk falling victim to the same unfortunate fate as Edmure Tully in Game of Thrones.)

There was another route you could take if you wanted to avoid that embarrassing outcome in the form of the more straightforward funeral pyres that have been prominently featured in movies including, Return of the Jedi, Return of the King, and, most recently, the return of Justice League, where Wonder Woman received the same treatment.

If you’ve ever wanted to literally go out in a blaze of glory like that, your options are fairly limited in America, as Colorado is currently the only state where you can be cremated in the coolest way possible. However, according to The Portland Press Herald, that could soon change, as the outlet reports a new proposal was recently introduced in the Maine legislature that would legalize the ceremony within its borders.

The bill can be traced back to the efforts of Good Ground Great Beyond, which specializes in untraditional and open-air funerals on the property it owns in the state. If the bill passes, it and any other nonprofit organization with at least 20 acres to its name would be permitted to hold a Viking-style goodbye.

I sincerely hope I won’t be having a funeral at any point in the near future, but I’m definitely signing the hell up for this if it ends up becoming an option.