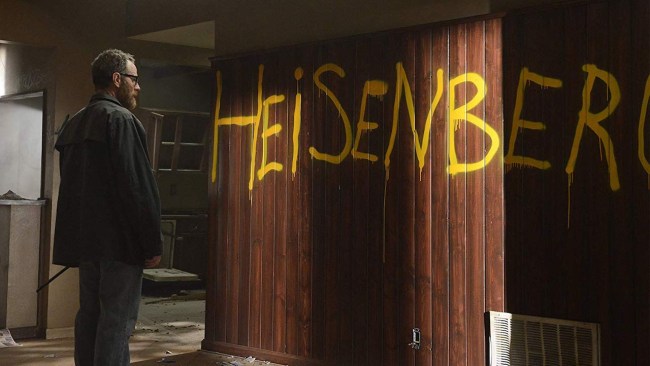 Sometimes, when I’m writing or reading about Breaking Bad, I can’t believe that I’m actually doing so, considering the fact that the iconic AMC series came to a close during my junior year of college. In fact, watching the “Ozymandias” episode is one of those moments in my life where I remember exactly where I was, who I was with, and how I felt (in a frat house, with my ex-girlfriend, hungoverness mixed with horniess).

But I digress, the point is the fact that El Camino: A Breaking Bad Movie has literally come out of the clouds to reintroduce the legendary series into our everyday lives is a gift that we must cherish for as long as it lasts. For all we know, once Better Call Saul wraps up, that’s a wrap on the Breaking Bad universe.

And one of the main reasons that we may never revisit the Breaking Bad universe again is because series creator and El Camino director has finally officially confirmed Walter White’s fate.

While Gilligan has been asked about White’s fate in the past, he’s only ever been coy about the answer, as he once replied to a Reddit user who asked if Walt died during a Reddit AMA: “Sure looked that way to me!”

But now, with the release of El Camino just days away, Gilligan has put an official stamp on Walter White’s ultimate fate: he’s dead as dead gets.

Although most fans have likely known this from the start, there has been a large corner of the internet who have always wondered if he could have possibly survived. But just because olde Heisenberg is dead does not mean he won’t pop up in El Camino in some way, shape, or form.