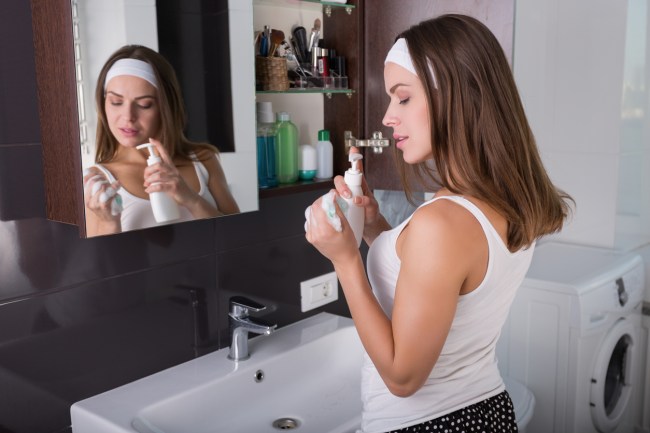 A sharp-eyed woman spotted something out of place in a man’s bathroom, and believes he was cheating on his girlfriend. The observant woman decided to warn the alleged cheater’s girlfriend with a stealth-fully placed note, according to a viral TikTok video.

An anonymous woman allegedly met a man at a bar during the day, and he invited her back to his place for lunch. She obliged, but when she got there, she pardoned herself to use the man’s bathroom. That’s where she purportedly discovered female toiletries, including women’s sanitary products.

The man claimed that the female products belonged to his roommate. The woman was skeptical. She wrote a note that said: “Girl he’s cheating,” and she tucked it away in the box of female hygiene products.

“Ladies if you’re watching this, this is a sign to always keep a memo pad and pen on the fridge for easy access,” she captioned the TikTok video, which went viral and has over 2 million views.

This is why I don’t date!!! 💀 #weekendtrip #familytime #girlfriend

Many commenters believed the man, and innocently has a female roommate. According to The Sun, the woman who posted the TikTok video responded, “He told me he has a roommate and who am I to argue about it. If this is his roommates, the worst that can happen is they find the dang note.”

One commenter said of the man who is potentially cheating, “I think this is genius sorry, wish you’d left more context though in case he’s innocent!”

RELATED: Men Who Wear This Are More Likely to Cheat, Says New Study

You can read many more cheating stories on BroBible, so you don’t make the same mistakes these people made in their relationships.