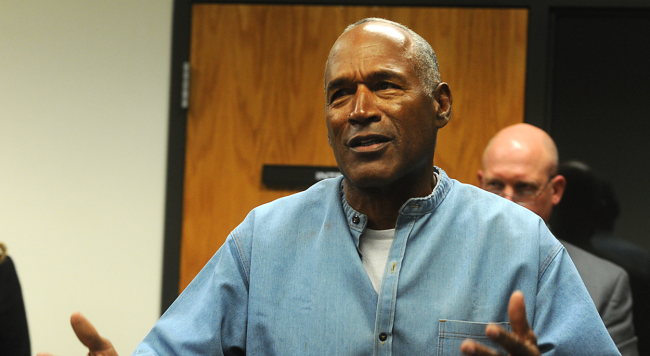 The last time we checked in on OJ Simpson he was weighing in on the Will Smith slap of Chris Rock at the Academy Awards ceremony. He did it, not because everyone was asking him to (as he suggested), but because he’s The Juice and he has expertise in the field of physical violence.

“It was unfortunate, I think Will was wrong, look I understand the feeling, in my life I’ve been through a lot of crap and every comedian in the country had an OJ routine, don’t think I wouldn’t want to slap one of those guys but you gotta accept that it’s humor and I didn’t even think that it was all that egregious, I thought it was semi-unfunny joke,” he said, among other things.

Amazingly, that wasn’t even the most bizarre video of OJ Simpson to make its way on to the internet over the past week.

Another, way more weird video starring The Juice showed up on TikTok and quickly went viral on social media.

In it, we see several girls who appear to be in their twenties getting very excited at the prospect of going into the 74-year-old Heisman Trophy winner’s bedroom and waking him up.

“Let’s wake up OJ at 1am,” the video overlay reads.

The girls, and some guy, then proceed to let out some ear-shattering howls, shouting “It’s party time in the house!” at The Juice as he lies in his bed.

A grinning Simpson then pushes off his covers and sits up as the ladies exit the bedroom.

Stumbled on a TikTok where a bunch of 20-something blonde girls wake up a 70+ year old man in a bed and that man is OJ and I feel like I’m having a stroke. pic.twitter.com/eWPxhnCuEw

The TikTok account to which the video appears to have been originally posted is no longer in existence [Correction: It’s still there], but the clip has still been watched almost 750,000 times on Twitter. It has also, as one might expect, received dozens and dozens of hilarious comments.

Well, they took a stab at making an interesting video, but in the end, probably should have just left it on the cutting room floor. It's a slice of life I really don't care about.

I have so many questions even though I’m going to hate all of the answers.

My brain can’t even begin to process what I’ve just watched. I’m feeling every emotion there is. I am truly at a loss.

True, he's the real victim here. I hope he makes it a point to rlly cut to the chase next time and get those girls to leave him be. Hope he takes a stab at being more assertive. I mean rlly take the gloves off on them.

It's where the knives are.

To be fair, they weren't alive when he murdered his ex-wife and her boyfriend, so maybe they don't know?

HEY! HE’S WORKING ON IT!