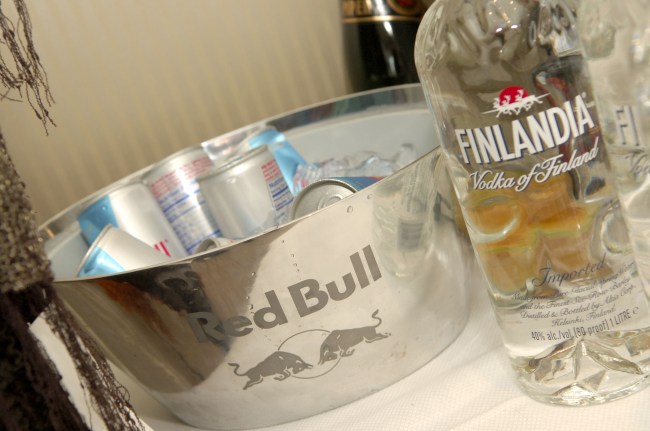 There are a few ways to keep your energy levels high when you hit the bar or the club, all of which involve spending too much money and only a couple of which are legal under federal law.

If your goal is to make it to closing time without passing (or getting escorted) out, then you’re probably going to want to bring some Red Bull into your life at some point even though you could probably buy an entire case at Costco for the price of a single drink.

Traditionally speaking, there are a couple of ways to consume Red Bull in a party setting, including one made famous by a video that needs no introduction.

The drink— which is as bad for you as cocaine and nowhere near as effective— has fueled a countless number of bad decisions since it was “invented” a couple of decades ago by a bartender who had the novel idea to mix vodka with a carbonated drink.

Anecdotal evidence would indicate Vodka Red Bulls are favored by the type of clubgoers who don’t consider the night a success until they’ve ripped their shirt off and challenged someone to come at them and see what happens.

However, there’s now scientific evidence to suggest the drink might actually be responsible for giving you the urge to punch someone in the face.

According to VinePair, a new study examining the impact of making the V.R.B. your drink of choice says combining energy drinks and alcohol increases your willingness to exhibit risky behaviors and engage in more dangerous situations.

The findings were the result of studying fish who swam in water tainted with alcohol and taurine (the ingredient largely responsible for Red Bull’s energy boost).

Members of that group were more likely to swim nearest to a fake predator fish than those exposed to either substance on its own. Oddly enough, they also became less willing (or able) to communicate with other fish, which explains why some drunk people just can’t be reasoned with.

Dr. Matt Parker, who co-authored the study, elaborated on the results, saying:

“We found that the addition of taurine, an ingredient in many ‘energy’ drinks, appears to exacerbate risky choices in zebrafish, as well as reducing their social cohesion.

Taken together, these data appear to suggest that mixing alcohol and taurine might be a factor in increasing some of the negative effects of alcohol.”