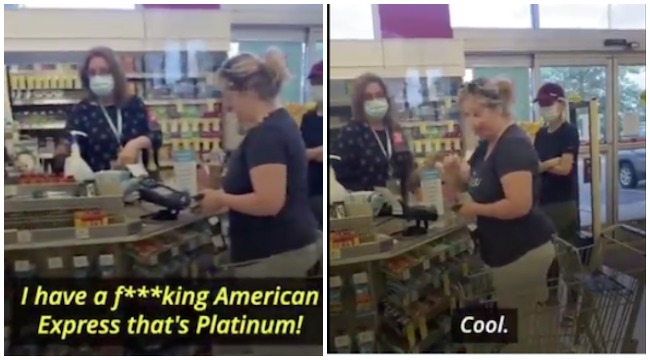 DID YOU KNOW that for every order of Ranchero’s Chicken Tacos sent back to the Chili’s kitchen, two Karens are born in the United States.

A recent study done by the Society for Middle-Aged Bob Cuts found that by 2030, Karens will have infiltrated into every classroom, airliner, and P.F. Chang’s in America, surpassing the growing population mass of Guys Who Wear Lululemon in just two short years.

An incident that recently popped off on the r/PublicFreakout subreddit could not have encapsulated the essence of Karen more if it married to a guy who bites a ball gag against his will in the bedroom.

She has been universally dubbed “AmEx Karen.”

Karen has meltdown because the line at Walgreens was taking too long, and she has a PLATINUM AMEX!!!

Woman let’s her cut in line but she doesn’t want to show ID to purchase alcohol. pic.twitter.com/tS43OjpIbk

Not to be #TeamKaren here because I know I could easily become her next victim, but is it really necessary to ID her? Everyone in town knows she’s the only graduate from the Class of ’78 still active on the class’s Facebook group page and upon graduation enrolled in beautician school before dropping to have her first son Travis.

I guess it’s true what they say: Don’t judge someone until you walked a mile in their thong sandals.