Walmart To Start Delivering Health And Wellness Products Using Advanced AI Drones; Are We Cool With This? 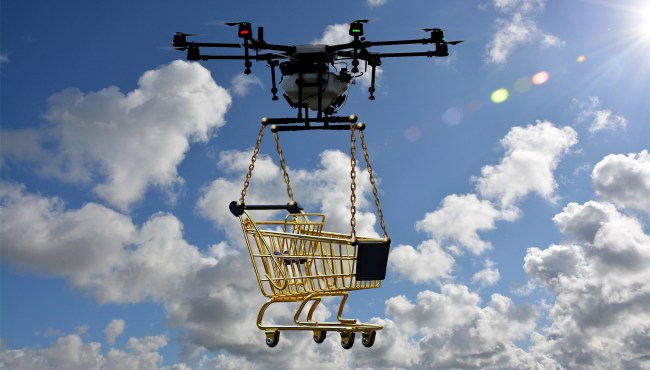 Last year it was revealed that Amazon was planning to begin using drones to deliver many of the zillions of products they ship out on a daily basis.

Amazon announced that their delivery drones will carry packages up to 5 pounds and can fly as far as 15 miles.

This week, Walmart also announced that they too are planning to start using drones to deliver some of their products.

Walmart will be partnering with drone delivery service Zipline to make on-demand deliveries of select health and wellness products.

Walmart announced Monday that it’s partnering with Zipline — a company best known for its medical drone operations in African countries like Ghana and Rwanda — to launch a delivery service of select health and wellness products in the U.S. The company says its intention is to later expand the partnership into offering drone delivery of general merchandise.

This follows last week’s news that the retail giant would run a pilot project for delivery of grocery and household products through automated drones with end-to-end delivery firm Flytrex. Walmart has accelerated the expansion of its pick-up and delivery services in the face of the Covid-19 pandemic, as virus-wary consumers increasingly prefer having items delivered at their doorsteps.

“We’ll never stop looking into and learning about what the next best technology is and how we can use it to better serve our customers now and into the future,” said Tom Ward, Walmart’s senior vice president of customer product, in a statement.

In addition to Walmart copying Amazon with drone delivery of products, the big box behemoth also introduced this week a plan that is similar in nature to Amazon Prime called Walmart+ that costs $98 a year.

CNBC reports Walmrt will begin trials of their drone delivery service near the company’s headquarters in Bentonville, Arkansas beginning in early 2021. Meanwhile, Mashable reports that Walmart has already begun testing drone deliveries with an Israeli drone company in North Carolina.

“Zipline will operate from a Walmart store and can service a 50-mile radius, which is about the size of the state of Connecticut,” said Ward. “And, not only does their launch and release system allow for quick on-demand delivery in under an hour, but it also eliminates carbon emissions, which lines up perfectly with our sustainability goals.”

This sentiment also jibes with what Amazon said about its drone delivery service in that it will be more energy efficient than someone delivering a package in their car.

In August, Amazon received approval from the U.S. Federal Aviation Administration (FAA) to operate its fleet of Prime Air delivery drones as a drone airline.

So, in addition to there being so much manmade junk floating around the planet we may someday not be able to go to space, now we’re planning on sending hundreds of drones into the skies around the planet as well?

Eh, I’m sure it will be fine and there is no way that any of these hundreds of drones equipped with state of the art AI technology will be monitoring and/or recording us in any way. I mean, if you can’t trust big companies like Amazon and Walmart to not invade our privacy without our knowledge, who can you trust?