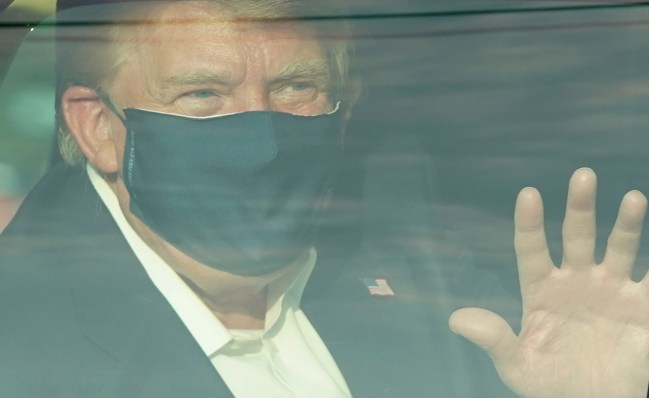 In case you missed it, on Sunday, two days after checking into Walter Reed Medical Center with the coronavirus, United States President Donald Trump left the hospital in a SUV to do a drive-by greeting of all the supporters gathered around the facility.

Dr. James P. Phillips, the aforementioned Walter Reed Medical Center attending physician, was so disturbed by this move by the President that he took to Twitter to express his misgivings about the event.

“Every single person in the vehicle during that completely unnecessary Presidential “drive-by” just now has to be quarantined for 14 days. They might get sick. They may die. For political theater. Commanded by Trump to put their lives at risk for theater. This is insanity,” wrote Phillips.

“That Presidential SUV is not only bulletproof, but hermetically sealed against chemical attack. The risk of COVID19 transmission inside is as high as it gets outside of medical procedures. The irresponsibility is astounding. My thoughts are with the Secret Service forced to play.”

Afterward, members of the Secret Service voiced escalating concern at what many of the agency’s personnel have determined is total disregard for their well-being amid a deadly and highly contagious pandemic. Agents have tested positive for the virus while traveling for the President’s political rallies, which he insisted on maintaining even against federal health guidelines. As employees self-quarantine or isolate in place, others have been forced to work longer hours to fill the void.

It’s a situation that has prompted growing and more vocal concern.

“That should never have happened,” one current Secret Service agent who works on the presidential and first family detail said after Trump’s drive-by, adding that those agents who went along for the ride would now be required to quarantine.

“I mean, I wouldn’t want to be around them,” the agent said, expressing a view that multiple people at the Secret Service also voiced in the wake of Sunday’s appearance. “The frustration with how we’re treated when it comes to decisions on this illness goes back before this though. We’re not disposable.”

The problem there is, as one Secret Service agent put it, “You can’t say no.”

Another agent said about the situation, “It was simply reckless.”

If @realDonaldTrump were my patient, in unstable condition + contagious illness, & he suddenly left the hospital to go for a car ride that endangers himself & others:

I'd call security to restrain him then perform a psychiatric evaluation to examine his decision-making capacity.

Trump said after being admitted to the hospital, “It’s been a very interesting journey, I learned a lot about COVID. I learned it by really going to school, this is the real school, this isn’t the read-the-book school. And I get it. And I understand it.”

Does he? Does he really?