The ‘WAP’ Performance At The Grammys Generated Over 1,000 FCC Complaints And They’re More Entertaining Than The Show Was 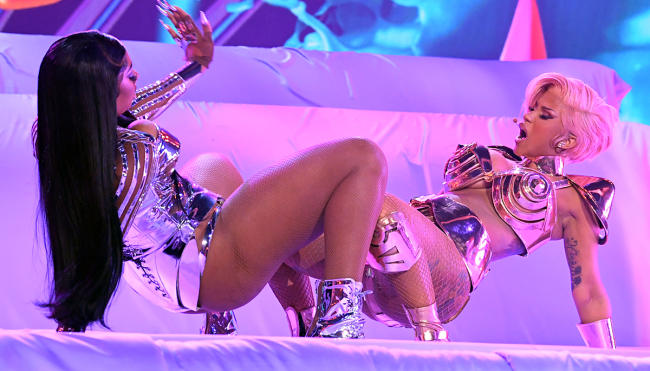 Much like some people care about The Big Game because of the commercials, it seems like these pearl-clutchers engage in a yearly exercise in masochism by tuning into the halftime show just so they can find literally anything to be offended by, whether we’re talking about Adam Levine blasting his nips or Sharika using the hips that don’t lie to scandalize a nation.

When you consider there are probably some viewers out there who thought Bruce Springsteen crossed the line because he thrust his hips a bit too hard while sliding across the stage, it came as no surprise that there was a deluge of FCC complaints rivaling the gushing flood Cardi B and Megan Thee Stallion rap about on “WAP” after the duo performed the song at the Grammys.

If you’ve seen the wild music video that accompanied the song or paid attention to the impressive amount of backlash the ode to “a wet-ass p-word” managed to generate, you have to think the kind of people who wanted to pour holy water in their ears after listening to it were chomping at the bit to air their grievances with the federal government before the performance hit the airwaves.

Thankfully, the two women made their job very easy thanks to the show they put on.

It didn’t take long for the FCC to reveal it had fielded over 80 comments from scandalized viewers, but according to Rolling Stone, it was ultimately inundated with over 1,000 emails following that fateful night. The outlet managed to dig up some complaints to supplement the ones that a Dallas television station unearthed in its wake, and while the Grammys are far from the pinnacle of entertainment, these scathing indictments are easily more enthralling than the show that generated them.

To kick things off, we have this person who is surely the life of every party they attend who literally admitted they only tuned into the Grammys because they wanted to find a reason to be pissed off. It appears they found one thanks to a performance that gave us this absolute gem where they channeled their inner Joe Buck while decrying the “disgusting” act:

“I wish to file a formal complaint against the televised grammy awards 2021. Although I did not watch the entire event, I just happened to tune in just to see if the mc’s, performers, etc. are still spewing any off colored and/or political jokes and I just happened switch my channel and was stunned to see the Cardi B/Megan, etc. etc. etc. display…

This was a disgusting display of nothing more than sluts being sluts.”

You’ve also got to love that they couldn’t be bothered to write out “Thee Stallion” but did manage to type out “etc.” three times.

We’ve also got this one from a masseuse who is apparently a huge fan of women embracing body positivity to empower themselves—unless those women are Cardi B and Megan Thee Stallion, who instead presumably made her embrace her pillow as she sobbed into it dreading the nightmares yet to come:

I felt violated with Meghan Stallion & Cardi B’s performance. I am pro sex-positivity and body positivity but this performance crossed the line into pornography. Many kids still awake at that time, and even non-consenting adults were unexpectedly staring at pure objectification of women at its finest.”

However, I’m not sure if anything managed to tickle my funny bone better than this person who definitely tries to incorporate “snowflake” and “cancel culture” into every single conversation but apparently needed a safe space after being triggered:

“I have hesitated to file this complaint, but in an environment where Mr. Potato Head, Dr. Seuss, Peter Pan, etc. are being removed from public viewing, it is hard to tolerate much less stomach the performance of Cardi B at the Grammys. It was disgusting and thought of young children possibly viewing it horrifies me.”