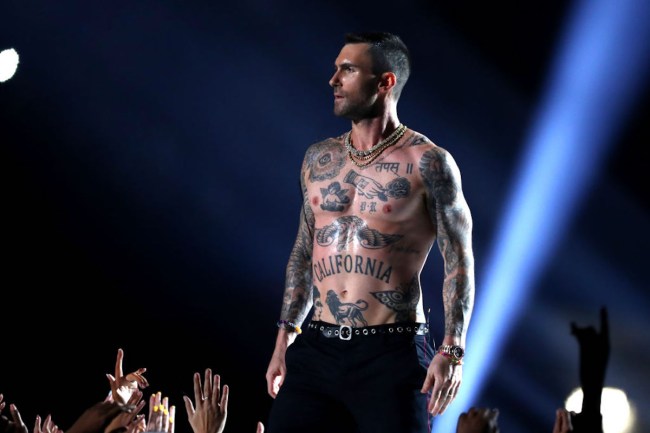 Super Bowl LIII wasn’t exactly the most thrilling contest in the world, and while there was a chance it could have been salvaged by some great commercials or a killer halftime show, that didn’t turn out to be the case.

In September, the NFL announced Maroon 5 had been bestowed with the honor of performing during the break in the Big Game for reasons I will never be able to fathom.

It was eventually revealed the league had attempted to get Rihanna to perform but she turned down the gig in solidarity with Colin Kaepernick, and despite the best efforts of fans to get Maroon 5 to do the same, we were treated to a widely panned performance featuring appearances by Travis Scott, Big Boi, and Adam Levine’s nipples.

Levine made the decision to blast his nips 15 years after Janet Jackson’s infamous wardrobe malfunction, and while I assume there were some people out there thirsting over his tatted torso, there were a number of people who were so pissed off by it that they took the time to write to the FCC to voice their displeasure.

According to SB Nation, the agency recently released a 94-page report outlining the many complaints it received concerning various aspects of Super Bowl LIII—including 55 different ones concerning Levine’s shirtlessness.

“Hi I am writing because I am upset about the half naked stripper on stage of the halftime show. That was unnecessary and out of line.”

“Male Nudity. Why Janet Jackson was bad but Adam Lambert shirt off was.”

“Hope you fine Adam Levine from Maroon 5 double what you fined Janet Jackson. she only showed 1 nipple, not both like he did. Stop discrimination since you obviously have not taken part of free the nipple.”

“I saw two naked nipples on Adam Levine’s chest after he removed his shirt. I was offended. Naked nipples should not be shown during primetime broadcasts.”