I Watched ‘Top Gun’ For The Very First Time And My God, What A Trash Movie 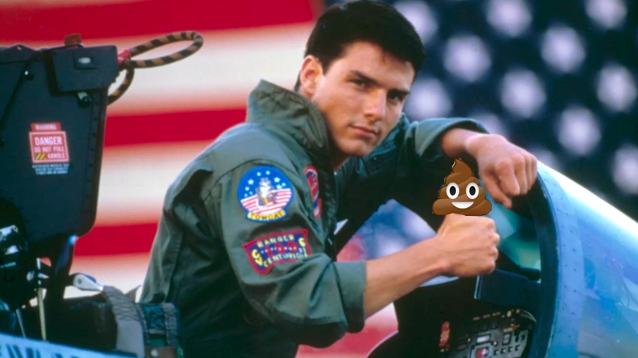 [This post was originally published in the lead-up to the 30th anniversary of Top Gun, but in conjunction with the first trailer for ‘Top Gun: Maverick’ that dropped yesterday, I thought it’d be the best worst idea to re-purpose it, seeing as I haven’t had a stranger threaten my life in a minute.]

I don’t have a good reason for not seeing the highest-grossing movie of 1986, besides citing the fact that at a young age my sole form of entertainment was derived from the bra and panties section of my mom’s Macy’s catalog–a magazine that if you were to turn a page today, you’d be turning six.

I was initially borderline bullied for this omission, so when I got to college I just pretended Top Gun was a huge part of my childhood. It’s amazing how injecting buzz phrases into Top Gun conversations like ‘AMERICA!’ and ‘FUCK THE RUSSIANS!’ and ‘PSEUDO-SEXUAL MEN’S BEACH VOLLEYBALL GAMES VEILED AS TOTALLY HETEROSEXUAL COMPETITION BETWEEN WARRIORS!’ can give off the impression that you are just one of the guys talking about guy stuff.

My close friends who know I’m a first-class fraud who has a harder time admitting that I haven’t seen a stupid movie than Maverick does admitting he’s gay, often ask me the question: How did you get a job at BroBible without seeing Top Gun? My answer is, every time: I got an Economics degree without being capable of accurately plotting a supply and demand curve and I previously got a job in Finance with an overdrafted checking account. ‘Fake It Till You Make It’ should be etched on my gravestone.

But after I made the mistake of telling my BroBible colleagues that I hadn’t seen the iconic American movie, I was treated as if they found a half-completed ISIS application on my desk next to a picture of me skinning a bald eagle. I needed to see it, to keep my job.So I carved out a couple hours out of my day yesterday, turned off my phone, banged out 3-7 pushups, screamed “FREEDOM!” aloud to myself, and pressed play.

Alright, alright, alright, I understand that the widespread appeal for the movie today is to incite some sort of childhood nostalgia and me watching it now is like walking in the mall’s food court today with my high school letterman jacket on and expecting chicks to flock.

With that said, I feel pretty confident when I say the movie sucked.I know that me shitting on something your childhood holds so dear may sting, but just remember, one time you thought Bill Cosby was cool.

Watching it for the first time as a 28-year-old man, it was difficult to ignore its flaws–the cringeworthy hokey dialogue, the incessant use of 80s power ballads–a feeble attempt at face fucking us with Patriotism, and the blatant sexual tension between Maverick and Ice Man that was shamelessly presented as a bitter rivalry.

And if that’s what the movie sold itself as, it would be transcendent. Lightyears beyond its time. Two elite pilots who want to fuck but are forced to repress their urges to cater to the cultural climate at the time. That’s honorable, Oscar-worthy. But the fact that the same people who live and die by Top Gun are the same ones who share ‘homosexuals are possessed by demons’ memes on Facebook, makes it impossible for me to ignore the double standard.

And for those of you who are uncomfortable with the idea that the movie is really about two pilots grappling with identity issues, the evidence does not favor you.

The last time I looked at something this way was in eighth grade when I was trying to get Nina Hendrickson to go to the dance with me so I didn’t have to roll to another one solo.

I’m honestly shocked Mav didn’t pass him a “Do you like me? Circle One” note here. Major missed opportunity by the screenwriters.

On the surface, Maverick’s ability to corral the entire bar to sing ‘You’ve Lost That Loving Feeling’ to Charlie is the ultimate power move. But then when you consider how Maverick would have relayed the night to his fellow pilots back at the barracks before bed, it turns dicey. Pathetic, even.

Maverick: I met someone tonight. Named Charlie.
Bunkmate: Was he hot?
Mav: She was a woman this time.
Bunkmate: Ya! Of course! I knew that!
Bunkmate 2: Was she one of those babes in the mini skirts licking their lips and twirling their hair at you?
Mav: No she was the one with the white golf shirt and knitted sweater draped over her shoulders.
Bunkmate: Interesting choice. How was the sex?
Mav: I couldn’t close.
Bunkmate 2: Suddenly, I’m forgetting the point of the story.
Mav: No, no. I got big leagued by a frosty-haired high school gym teacher. 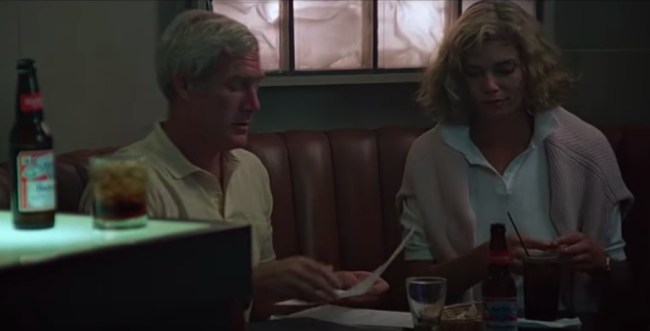 Bunkmate: Oh, so what did you do–go after the 300 other options at the bar?
Mav: No, no. Even better. I FOLLOWED HER INTO THE WOMEN’S RESTROOM.
Bunkmate: You wha— 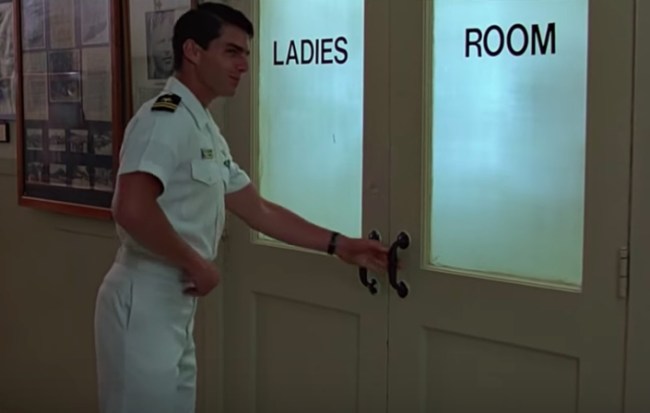 Bunkmate: Oh. You dirty dawg. You do the deed in the stall or on the sink?
Mav: Neither, I got uncomfortably close to her face and tried to churn up the charm, while she was only focused on the war the Bud Heavy’s were waging in her stomach. 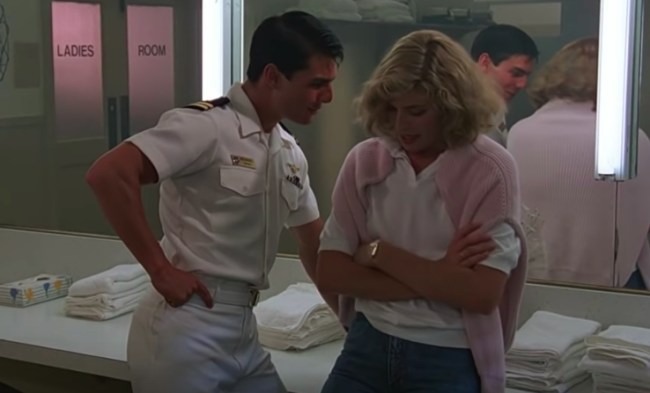 Bunkmate: Um. Well, did Ice Man at least score with someone?
Mav: No, he was standing in the corner all night giving me ‘fuck me’ eyes and drinking ice water. Definitely a fun guy to party with. 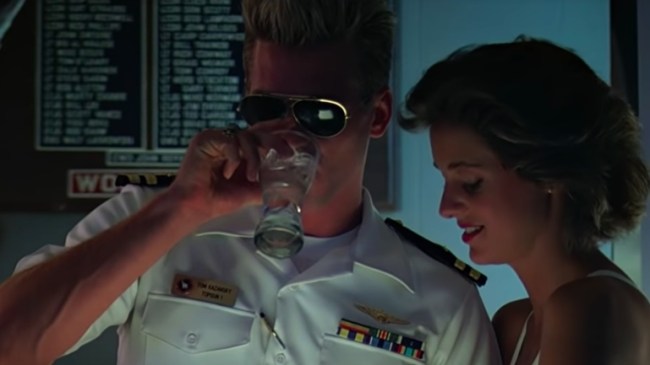 After a few more sweaty, red-faced flight instructors lay into Mav about his recklessness with the $30 million planes that our parents’ tax dollars paid for, we arrive at the iconic beach volleyball scene–which can most aptly be summed up by a conversation I had with my friend Chad.

After Maverick goes over to Charlie’s place only to take a shower and bail, Charlie knows that her only angle to seduce the dodgy pilot is to literally dress up as a man. Mav was pleased.

This encounter leads to an uber-passionate blue-tinted sex scene with ‘Take My Breath Away‘ playing in the background for the 18th time. The sex scene is objectively awful. We aren’t even teased with a hint of nudity–no flash of a nipple, no quarter inch of butt crack. Just Maverick falling asleep on top of Charlie. So why even include it? Well, initially they didn’t.

Moviegoers at initial screenings complained that there was no love scene, so the company obliged. McGillis, however, had already dyed her hair darker for her next film. This is why the scene is tinted blue. Also noticeable as a subsequent shoot due to the longer length of Tom Cruise’s hair (particularly in front). 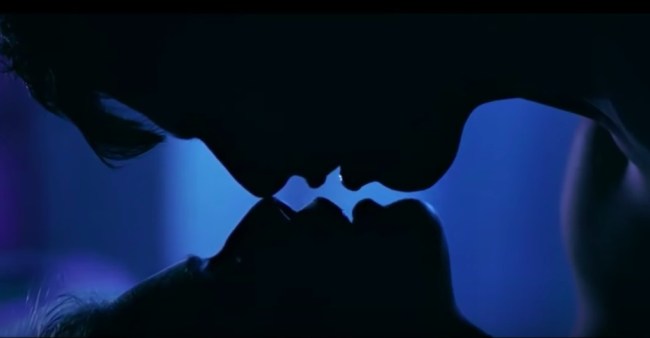 I’ve seen better sex scenes through the squiggles on dirty channels I wasn’t subscribed to growing up.

We’re approaching the end of the movie now and I can tell you the benches in the locker room are made of finely sanded beachwood but I can’t tell you who the actual enemy is. It’s as feasible that the Top Gun pilots were just shooting down commercial airliners carrying American families to the Caribbean than it is that they were actually a national security threat. The enemy is just a black blurb in the sky for an entire 14 seconds of the movie. Probably good family men killed solely so these egomaniacs can etch their names on a fucking plaque.

The movie then transitions to Charlie bashing a clearly disheveled Maverick for not saying goodbye after calling it quits even though he is a mere 48 hours removed from killing his best friend–an excellent character trait of Charlie’s that makes me feel wonderful about their all-too-predictable ‘We’re in love!’ moment of reconciliation that caps off their confusing relationship.

The movie climaxes after instructors deem it a smart idea to let Maverick face real enemy fire even though he is one bad thought away from hanging himself from his bunk bed. The final fight scene is admittedly edge-of-your-seat entertainment, but I am distracted with fighting the urge to fetch these two dudes a fucking water bottle. 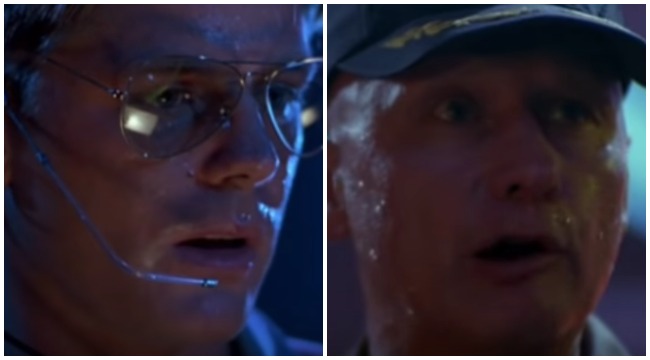 As we are all well aware, the good guys win, the arch-rivals  make up, and America solidifies itself as the greatest country in the world. That last part may be the only thing about the entire movie I can get on board with.

Other than that, it’s a steaming pile of shit.