WTF Is Popcorn Salad? The Midwestern Mayonnaise Dish From Hell That Must Be Stopped 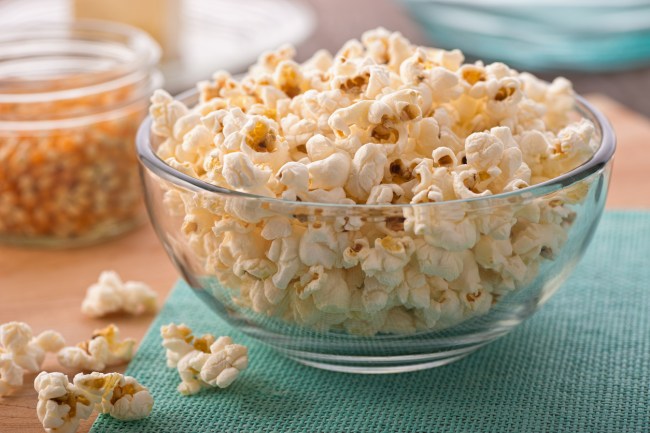 If you look up the word “salad” in the dictionary, there are two definitions that seem to contradict each other.

Definition number one, via Merriam-Webster: “Any of various usually cold dishes: such as a: raw greens (such as lettuce) often combined with other vegetables and toppings and served especially with dressing.”

Definition number two: “Small pieces of food (such as pasta, meat, fruit, or vegetables) usually mixed with a dressing (such as mayonnaise) or set in gelatin.”

In other words, any combination of ingredients tied together with dressing can be considered a salad. Not just an assortment of green, leafy veggies in a bowl that we eat in the name of a healthy diet. IE: Egg salad, chicken salad, and tuna salad – Technically salads!!!

All of the following cold salads are a staple of picnic season. I’ve enjoyed these aplenty in over the years.

As an adventurous eater, I’ve had some strange salads in my time. The one dish I’ve never had and I’m not sure I could stomach?

What is popcorn salad?

A cold dish that the Food Network claims is from the Midwest, made with the following ingredients mixed together in a bowl.

All of these ingredients are whisked together in a bowl. The result is some sort of crunchy, mayo-based concoction that sounds slightly nauseating.

I can’t stop thinking about how soggy it gets. After pursuing some midwestern recipe blogs, apparently are variations of the above popcorn salad recipe that call for bacon.

As someone who can’t really deal with the texture of mayonnaise slathered on sandwiches, nor in large heaps coagulating things together in most salads, this picnic and potluck dish from hell must be stopped.

Thanks to an old clip from the Food Network, the idea of popcorn salad is going viral. Some are quick to hate while others are quick to defend.

What the hell is this pic.twitter.com/7PSYVtytQ8

What y’all know about the Mayonnaise Popcorn Salad?

Upon further thought, I’m CONVINCED this salad is propaganda from Big Popcorn – a ploy from the popcorn lobby to market popcorn consumption beyond just movie night. After doing a little digging, I found a recipe for popcorn salad on the website of the Popcorn Board – a non-profit organization and a Research & Promotion (R&P) Program funded by U.S. popcorn processors.

I just can’t get over what the texture must be. Pasta salad does well as a soggy salad because no one expects cooked pasta to be crunchy. But the longer popcorn sits in a mix of mayo and sour cream and vinegar, the grosser it has to taste, right?

I have lots of questions about the popcorn salad, but the one at the forefront is: wouldn’t the mayo dressing make the popcorn soggy as it sits?

If you looked at the popcorn salad and thought, “Hmm, that looks good,” then I never want to hear you talk about being worried about what’s in the Covid vaccine.

There is just no way popcorn salad is actually good. I’m happy to be proved wrong here, but I refuse to believe anyone has ever made popcorn salad and actually enjoyed it.