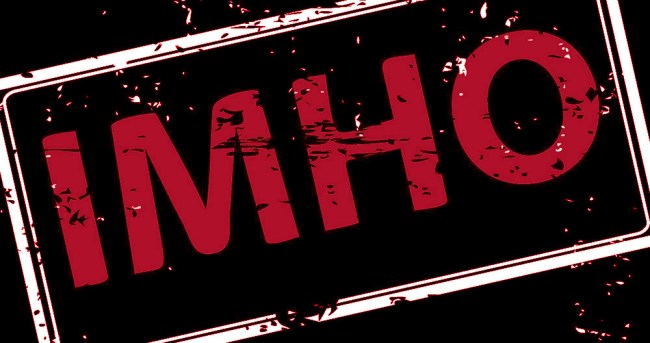 What is the meaning of IMHO? Think you know what it stands for? What if I said that around half the internet disagrees with you? Because they do.

That out of the way, we all know that IMHO stands for “In My Honest Opinion,” right?

What does IMHO stand for?

What does "imho" stand for?

Unfollow me if you think the H in IMHO stands for "honest." Seriously, I'm so angry right nowhttps://t.co/sW5TRunyTJ pic.twitter.com/GK3TGuZQ9E

Nononono. The H stands for “honest,” I don’t care what “experts” like Merriam-Webster or a glossary from a 1986 PC Magazine that The Atlantic found.

And I don’t care if all of these old-timey sources also say the H stands for “humble:” 1990’s The Macintosh Way and Inside Compuserve, 1991’s The First Book of the Mac, 1996’s More Modems for Dummies, 1996’s The Internet Complete Reference, and 1999’s Teach Yourself the Internet for Students.

There are IMHO truthers out there who think the H stands for “honest” and I don’t know what’s real anymore. https://t.co/YelltzS4oM

anyone who thinks the H in IMHO stands for "honest" can, IMHO, get the hell out of my life

I know it's painful for people to learn they’ve been wrong about IMHO — it stands for humble, not honest — but on matters of consequence and fact, it’s best to be humble and admit it. Honestly.

Why are people debating what “imho” means? It’s obviously humble. Why would someone say “in my HONEST opinion”? That’s stupid. You’re all being stupid.

when somebody tells me they think “imho” means “in my honest opinion" pic.twitter.com/HY2u1gqrHw

This is starting to get out of hand.

i cannot believe we are still talking about "IMHO," it is humble, who clarifies their opinion is honest?? Isn't that what an opinion is????

It's obviously honest and anyone who doesn't agree is WRONG.https://t.co/qhyF9pOROw

Thotsssss it's HONEST like seriously who the hell says "in my Humble opinion???" pic.twitter.com/0vzYL8hP5Y

Dear BuzzFeed,
It is, and always will be, Honest.

Now, with that completely not settled at all, can we get back to what the correct pronounciation of “GIF” is?