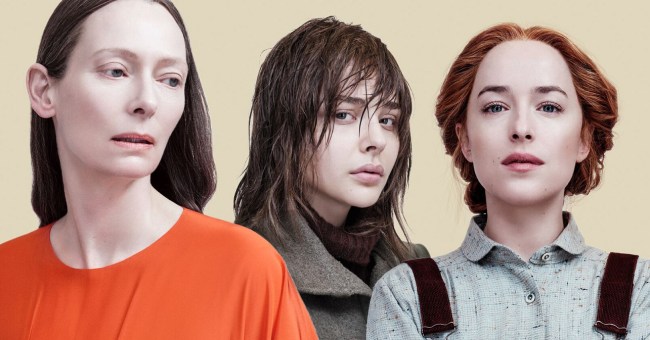 Anyhoo, speaking of the internet and streaming services, check out what’s new on Amazon Prime Video for the month of May 2019.

May brings four Amazon Original series and two Amazon Original movies exclusively available for Prime members to stream or download at no additional cost to their membership.

• Suspiria: In this Amazon Original, a darkness swirls at the center of a world-renowned dance company, one that will engulf the troupe’s artistic director, an ambitious young dancer, and a grieving psychotherapist. Some will succumb to the nightmare. Others will finally wake up. Starring Dakota Johnson, Tilda Swinton, Mia Goth, Lutz Ebersdorf and Chloe Grace Moretz. (Available in UHD and HDR; May 3)

• Sneaky Pete S3: Sneaky Pete revolves around a con man named Marius Josipovic who assumes the identity of his ex-cellmate, Pete, and uses Pete’s estranged family to try and escape from the past. In season three, all the members of the Sneaky Pete family explore their identities; their purpose; where they belong; where they’re going. It’s a dangerous journey. They could lose themselves, or worse – lose their lives. (Available in UHD and HDR; May 10)

• Wishenpoof S2c: Bianca is just like any other little girl, except for one teensy little thing. Bianca has Wish Magic, so she can make wishes come true! Whether she’s at home in Wish World, at the Willow Tree with her fairy friends, or at school with her non-fairy friends, Bianca and her hilarious teddy bear sidekick Bob navigate day-to-day problems. In these new episodes, Bianca’s magical adventures help her learn how to be a good friend, ask for help when she needs it and how to take care of a fuzzy Froovle. (May 10)

• Yardie: Set in ’70s Kingston and ’80s Hackney, Yardie (directed by Idris Elba), centers on the life of a young Jamaican man named D who has never fully recovered from the murder of his older brother Jerry Dread. Dispatched to London where he reconnects with his childhood sweetheart, Yvonne and his daughter who he’s not seen since she was a baby, he encounters the man who shot his brother 10 years earlier, and embarks on a bloody, explosive quest for retribution. (May 15)

• Fleabag S2: Fleabag is back for a second bite, and this time she is going toe to toe with the man upstairs. Picking up a year on, there are still old wounds to unpick and new ones to dress as the next chapter of Fleabag’s life takes her to hell and back. Since the end of the last hilarious series when her entire family rejected her, her darkest secret was revealed, and she nearly threw herself in front of a car, she’s back for more laughs than ever. With hope and faith at the core of season 2, our heroine finds herself in the midst of a battle she is determined to win: Fleabag vs God. (Available in UHD and HDR; May 17)

• Good Omens S1: The end of the world is coming, which means a fussy Angel and a loose-living Demon who’ve become overly fond of life on Earth are forced to form an unlikely alliance to stop Armageddon. But they have lost the Antichrist, an 11-year-old boy unaware he’s meant to bring upon the end of days, forcing them to embark on an adventure to find him and save the world before it’s too late. (Available in UHD and HDR; May 31)

In addition to Amazon Originals, licensed TV series coming to the service include season 3 of ITV’s British comedy The Durrells, and season 4 of BBC’s drama Poldark. Additionally, films including Reservoir Dogs (1992), Mission: Impossible (1996), Friday Night Lights (2004), and Fun Size (2012) arrive in May.

Coming to Prime Video Channels this month, Starz is set to debut a new limited series on May 5, The Spanish Princess, as well as season 2 of Vida on May 23.

NEW IN MAY – AVAILABLE FOR RENT OR PURCHASE ON PRIME VIDEO

NEW IN MAY – AVAILABLE FOR STREAMING ON PRIME VIDEO CHANNELS

May 5
The Spanish Princess (Starz)