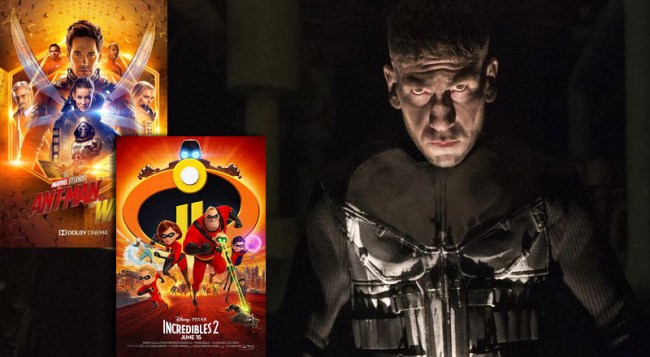 It’s almost Christmas, so you know what that means, right? No, not family get-togethers or presents, I’m talking about some newfound free time to veg out on the couch and get caught up on our Netflix binge-watching!

After all, there are way too many good TV shows and movies that we still have yet to watch this year.

Speaking of that, Netflix just released their list of what’s new in the month of January. Some highlights for the first month of 2019 include Netflix Originals like Marvel’s The Punisher: Season 2, Conversations with a Killer: The Ted Bundy Tapes, Fyre: The Greatest Party That Never Happened, A Series of Unfortunate Events: Season 3, plus recent releases like Ant-Man and the Wasp, The Incredibles 2, and Solo: A Star Wars Story.

Better hurry though on some other titles, because titles like Rogue One: A Star Wars Story, The Shining, Armageddon, and all the Sharknado movies are going, going, gone in January.

Available January 1
A Series of Unfortunate Events: Season 3 (Netflix Original)
In the series’ third and final act, the Baudelaires will stop at nothing to solve the mysteries of the VFD and end Count Olaf’s relentless pursuit.

Comedians of the World (Netflix Original)
This global, first-of-its-kind, series will showcase 47 comedians from 13 regions in 8 languages in an unprecedented stand-up comedy experience. The groundbreaking series will feature a range of stand-up specials from comedians diverse in style, gender and ethnicity. Get ready to start the new year off with a laugh!

Available January 11
Friends from College: Season 2 (Netflix Original)
Mistakes were made. Feelings were hurt. Life goes on. Now, with a wedding on the horizon, the gang tries to put the past behind them

Available January 18
Fyre: The Greatest Party That Never Happened (Netflix Original)
The Fyre Festival was billed as a luxury music experience full of social media influencers on a posh island, but the reality was far from the promises

Available January 24
Conversations with a Killer: The Ted Bundy Tapes (Netflix Original)
Get a unique look inside the mind of an infamous serial killer with this cinematic self-portrait crafted from statements made by Ted Bundy