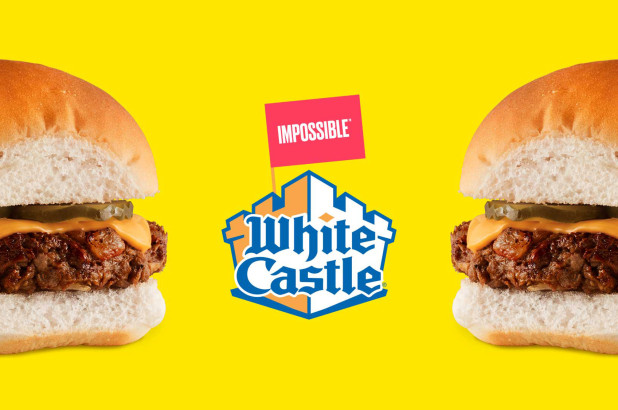 If you were to bet on which fast-food chain would introduce vegan burgers on a major scale, White Castle probably wouldn’t be your top pick or even in your top ten picks. But these are fascinating times and White Castle has debuted vegan sliders that “bleed” to their menu. However, these plant-based Impossible Burgers are not available everywhere just yet and they will cost more than your typical White Castle slider.

According to Impossible Foods, it took five years for their research team to dissect delectable hamburgers made from heavenly meat to make their plant-based version. That meant recreating the “precise flavors, textures, aromas, and nutrition of ground beef,” but only using plants. The Impossible Burger is said to use 95% less land, 74% less water, and creates 87% less greenhouse gas emissions than cows.

The Impossible Burger is made from wheat, coconut oil, potato protein, and something called “soy leghemoglobin,” which the U.S. Food and Drug Administration did not consider a food and held up the plant-based burger’s FDA approval last year. The FDA never declared the substance unhealthy for human consumption and the Impossible Burger was approved.

Impossible Foods uses a fermentation process with the yeast and leghemoglobin that produces an iron-heavy molecule called “heme” that is also found in meat. “It is responsible for the characteristic of taste and aroma of meat, it catalyzes all the flavors when meat is cooked,” Impossible Foods says. “Heme is exceptionally abundant in animal muscle – and it’s a basic building block of life in all organisms, including plants.”

“Plant-based proteins are growing. We felt it was a good opportunity to test it with our customers,” said Lisa Ingram, White Castle’s CEO. “We think it will appeal to a broad range of customers — those that are meat eaters who want to try something different and non-meat eaters who want this.” It will be interesting to see how the White Castle customer base, which probably isn’t exactly health-conscious, welcomes this vegan burger.

Last year, Leonardo DiCaprio invested into Beyond Burger, “the world’s first plant-based burger that looks, cooks, and tastes like a fresh beef burger.” Earlier this year, McDonald’s introduced a veggie burger that was, of course, called the “McVegan.” However, they only rolled it out in two countries. The upcoming Harold And Kumar Go To White Castle To Get Veggie Sliders is going to be tremendous.