Who Are The NELK Boys And What Did They Do Now? 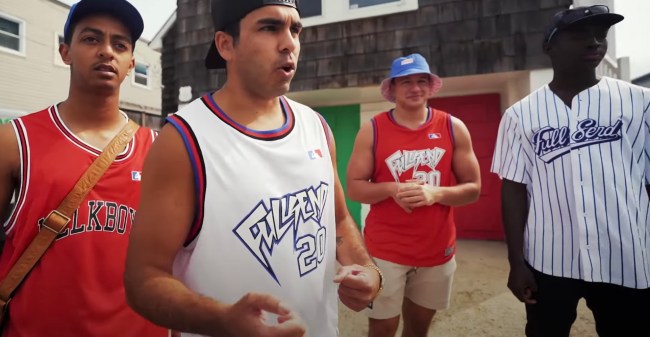 There are two ways of understanding the NELK Boys: You’ve either have no idea who they are but you’ve heard of them or you’re such a passionate fanboy that you consider them a household name.

In short, the NELK Boys are a group of YouTubers / social media stars on the cusp of becoming a burgeoning pop culture phenomenon with their Full Send brand. They started on YouTube with “savage” pranks about five years ago (IE: Eating Meat In A Vegan Restaurant!,  Coke Prank on Cops), then parlayed their popularity on YouTube to other social media platforms. Most notably, their Full Send Instagram, which serves as their content hub.

They’ve racked up over 5.7 million subscribers on YouTube and, while they’re frequently in Los Angeles, travel around the United States (and, world) doing pranks and hosting fan meet-ups. These meet-ups have a tendency to get rowdy. They were recently accused of throwing parties at Illinois State University, despite strict coronavirus rules.

Over 100 Illinois State University students now face potential discipline for their involvement in the NELK party.

The NELK Boys have rabid fan base (mostly teenagers and college age), often showing up in public wherever they happen to be. They sell limited edition merch, hyped to their audience as capsule collection drops. Think part SUPREME, part Jordan brand. Things sell-out in minutes and NELK Boys fans show up by the hundreds of thousands, as evident from the the admin view of their Shopify dashboard.

Ask anyone who has ever run a Shopify… That’s A LOT of customers:

If you’re reading this, you’re probably are hearing about the NELK Boys for the first time because of their recent shenanigans in New Jersey.

A recent vlog shows the NELK Boys partying it up at the Jersey Shore and elsewhere, staying (presumably, renting?) the famous house in Seaside Heights from MTV’s Jersey Shore. They then show up at a Trump rally to troll Trump supporters for a YouTube vlog, eventually getting kicked out of the rally.

Which brings us to their Drop Day, when they release their merch at a certain time, much similar to a limited edition sneaker drop.

This caused a frenzy with their fans, who showed up in droves in Seaside Heights at the house made famous by Snooki, Pauly-D, J-Wow, and the rest of the crew.

This is what some of the NELK Boys hysteria in Seaside Heights looked like:

Nelk boys just held their SECOND meetup of the day, an absolutely packed mess with no masks, no social distancing. pic.twitter.com/6eIwE3zgdb

Police cleared the scene and it looks like they got kicked out of the famous Jersey Shore house.

Police in jersey themselves said we did nothing wrong today! And they writing we hosted a party. Anywhere we go people will find us! They blaming the fact we have a strong fanbase

You could call it a Situation:

Who are the NELK Boys and how’d they get famous?

First and foremost, the NELK Boys are content creators. Their tagline is “No half sends,” which has become a bit of a partying mantra to young men for “giving it all for your boys.”

While Jake Paul and his brother Logan Paul are more mainstream YouTube names and quite controversial, the NELK Boys have grown a loyal fanbase from a similar content creation strategy. The NELK Boys are just a little more under-the-cultural-radar compared to the Paul brothers.

Really, Nelk and their Full Send brand constitutes a collective of YouTubers, with the three main principles being Kyle Forgeard, Jesse Sebastiani, and Steve Deleonardis. They’ve gained notoriety for their vlogs and prank videos, including a recent video where Steve stages a “protest” at a gym in Los Angeles. They called it a Brotest.

Think MTV’s Jackass back in the day, but in a digital world where every aspect of your life can be documented and thrown on social media for entertainment value.

Or perhaps a better comparison is Vitaly Zdorovetskiy, an OG prank YouTuber arrested for a slew of pranks at high profile sporting events – including streaking during the 2016 NBA Finals – for the sake of content. Vitaly famously coined the phrase “Do you even lift, Bro?”, spawning millions and millions of tank tops with the catchphrase around the world (though I don’t think he trademarked it). He’s since been arrested for assault after alleged attack against a female jogger in Miami.

Secondly, the NELK Boys are provocateurs, growing increasingly famous from their stunts.

Here’s an example of some Full Send greatest hits from their main channel.

You get the gist. They also have separate channels for each creator, just growing their overall reach to their fanbase.

How do they NELK Boys make money?

Like many digital creators, the NELK Boys monetized their videos via the YouTube partner program with pre-roll and mid-roll ads. Cost Per Thousand Impressions (or, CPMs) fluctuate on the platform depending on all sorts of factors. As long as a video hasn’t been flagged by YouTube’s increasingly rigorous content standards for monetization, it can go as low as $1 per thousand views to $10 per thousand views; sometimes higher depending on advertiser demand during a season (IE: Black Friday).

One site estimates the NELK Boys are making between $200k – $1.7 million on YouTube alone, but that’s purely speculation based on their viewership numbers vs. their actual ad impressions.

More important to the NELK business model is the merch drops at FullSend.com. The merch includes $100 hoodies, a credit card holder for $70, and a Zippo lighter for $100. These “drops” almost always sell out, presumably after ungodly amounts of gross revenue are accrued. Millions of dollars at a time? Who knows. Merch is then made-to-order and drop-shipped.

The secondary resell market is littered with Full Send merch from previous drops. On cursory glance at Grailed and Poshmark, it looks like most Full Send stuff is being flipped at a net loss for the buyer.

Not exactly a great investment vehicle.

No. The NELK Boys are not banned from YouTube, but following their tour partying in various college towns during the COVID pandemic, YouTube has demonetized them to take away revenue generated from their YouTube views and discourage their off-platform behavior.

As reported by Taylor Lorenz from the New York Times, who previously noted Nelk in her reporting on TikTokers and other LA creators partying during the pandemic.

YouTube: “We have temporarily suspended monetization on the Nelk Boys channel for violating our Creator Responsibility policy. If we see that a creator’s off-platform behavior harms our users, community, employees or ecosystem, we take action to protect the community." pic.twitter.com/c25AqvAxuL

This caused some outrage from the YouTube creator community. As of this writing, I got a slew of YouTube ads on Nelk Boys videos (in particular, a Manscaped ad), so I guess the decision has since been reversed by the platform?

NELK Boys DEMONETIZED BY YOUTUBE FOR COVID PARTIES! According to TeamYouTube account, NELK’s channel was suspended from the partner program for off-platform behavior.

What are your thoughts? pic.twitter.com/72Wo2IErRS

Hopefully this was helpful at explaining who the NELK Boys are. It’s an extremely successful content-slash-business ecosystem, with a fanbase fueling their partying, pranks, and lifestyle by watching their videos and buying their merch. Their popularity is growing.

Will be interesting to watch how it grows, as an armchair content consumer  – Will it explode into off-YouTube content franchises a la Jackass or will the content-meets-commodity feedback loop just keep steamrolling in perpetuity?