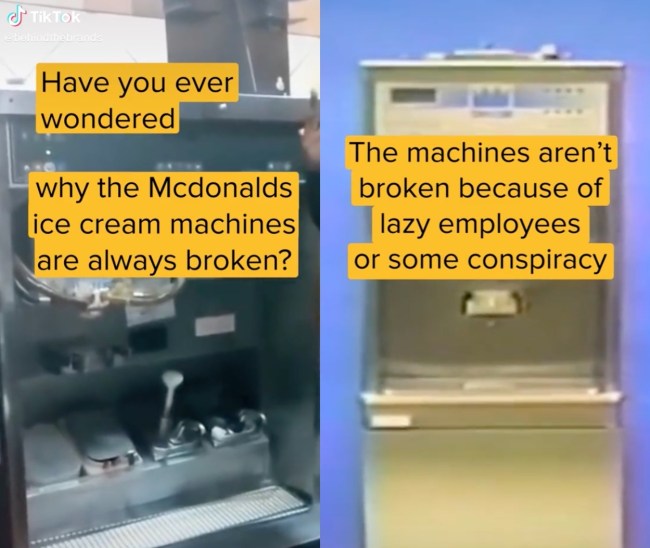 There are three certainties in life: Death, taxes, and the McDonald’s ice cream machine always being broken.

Tell me you don’t know this situation far too well: You’re craving a cone of soft serve or a McFlurry. A quick, simple treat. You pull into a McDonald’s drive-thru to order.

“Can I get an Oreo McFlurry, please?”

On the other end of the the intercom, you can almost hear the worker sigh.

You knew you were setting yourself up for soul-crushing disappointment, but you kept a glimmer of hope in the back of your head that maybe – just maybe! – today is the day the ice cream machine is actually working.

Why is the McDonald’s Ice Cream Machine Always Broken?

In recent years, there have been tons of revelations about why the McDonald’s ice cream machine is always broken. In fact, a couple people have even created apps that track which McDonald’s locations are reporting broken ice cream machines, potentially sparing you the let down.

In November 2020, the fast food behemoth has even pledged to fix the problem with a so-called “task force” to fix the broken ice cream machines.

You don't have to make ice cream if you say it's broke pic.twitter.com/vDiEthAaEa

Jack McDermott aka PieFace – a streamer and former Big Brother UK participant – recently dropped a little behind-the-scenes insight on why the Mcdonald’s ice cream machine is always broken on the Happy Hour Podcast.

He offered a simple explanation:

“It’s a pretty simple reason, and that’s that they are so expensive they will only buy one per store, but because it gets so much use it just overheats.

“So that’s why they have to stop serving them because it just overheats. So when it’s too popular they need to allow more time for it to freeze down.

“Basically it comes out like slush. Obviously if they had two machines it would solve that, but it’s just the McDonald’s way.”

McDonald’s ice cream machines are made by a company called the Taylor Company, a long-time supplier of ice cream machines to McDonald’s. The machine goes through a daily four hour self-cleaning process, which locks out soft serve production until completion.

According to @BehindTheBrands, it often fails during the self-cleaning process, rendering the machine useless.

A broken machine requires a McDonald’s location to call a Taylor technician to fix the ice cream machine. These service calls are extremely expensive, with Taylor earning 25% of its annualized revenue just from fixing the McDonald’s ice cream machines.

Therefore, they usually just stay broken until a restaurant deems it necessary enough to fix it.

JOHNNY HARRIS made a great video on the topic, check it out to learn more #marketing #businesstiktok #behindthebrands #mcdonaldsicecreammachine

YouTuber Johnny Harris elaborated further, with an extremely comprehensive video on the topic.

Someday we’ll live in a perfect society, with flying cars and a McDonald’s ice cream that works every single time.