Why Running Makes You Have To Poop 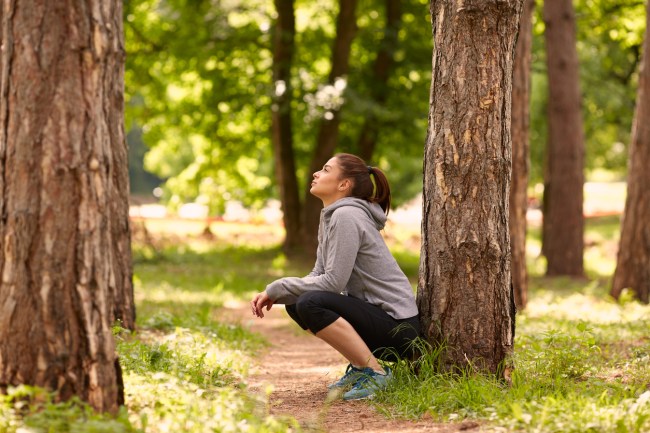 When you gotta go, you gotta go. The age-old adage also applies to runners – and the urge to go to the bathroom can happen at the most inopportune times. Science answers the question: Why running makes you poop.

Runners can power through most obstacles while on a marathon. However, when nature calls it can present major problems for runners. Science explains that factors such as diet, stress, and blood flow can cause joggers to go to the bathroom while running – which could be caused by motion that gets things started.

“Your organs are jostling around,” Tamara Duker Freuman – a New York City dietitian who works in a gastroenterology practice – told Insider.

Lisa Ganjhu – D.O., gastroenterologist and clinical associate professor of medicine at NYU Langone Medical Center – told SELF, “It happens to different people for different reasons, but most common sense is that it’s because you’re moving, and that up and down motion seems to stimulate the colon a bit.”

“Contributing factors likely include the physical jostling of the organs, decreased blood flow to the intestines, changes in intestinal hormone secretion, and pre-race anxiety and stress,” said Dr. Stephen De Boer, a registered dietician with the Mayo Clinic who has studied this topic. “What is clear is that food moves more quickly through the bowels of athletes in training.”

RELATED: Woman Poops Her Pants In The Middle Of Marathon – Powers Through To Finish Race, Notches Best Time

Your Pre-Race Diet Can Answer Why Running Makes You Poop

“That can cause some diarrhea because of the level of sugar,” Ganjhu states, and adds, “People who are simply drinking more water are more likely to have softer stools.”

“We are all different in how we react to specific foods,” Hardeep Singh, M.D. – a gastroenterologist at St. Joseph Hospital in California – told Runners World. “The best thing to do is to track what foods you eat and how that correlates with your bowel movements in the weeks leading up to a race.”

“At least one day before running, limit or avoid high-fiber and gas-producing foods, such as beans, bran, fruit and salad. If you run every day, experiment to find a tolerable level of fiber. Otherwise, simply eat those foods after you run,” wrote Dr. Stephen De Boer, a registered dietician with the Mayo Clinic who has studied this topic.

The Mayo Clinic advises runners to stay away from taking aspirin and other NSAIDs like ibuprofen because they tend to “increase intestinal permeability, causing the GI problems you’re trying to avoid.”

Blood Flow Can Explain Why Running Makes You Poop

Running can also cause diarrhea, according to science.

“Running causes your body to divert blood from your GI tract to your muscles, which, if you have much of anything in your system, can contribute to diarrhea,” Singh proclaims.

He recommends, “If you can get on a regular schedule, ideally you should try to time it so that you have a good healthy bowel movement a few hours prior to race time.”

Christopher P. Hogrefe – a sports medicine physician at Northwestern Memorial Hospital – tells Shape, “But what people don’t know is that it can decrease the amount of blood flow occurring to the intestines, causing abdominal cramping and potentially the urge to defecate.”

Dr. Nguyen adds, “You need blood flow to the gut to digest and break down food.”

Ganjhu suggests, “Everyone is a little bit different as far as how their body reacts to different things, so usually my advice if you’re running a race, don’t do anything new the day of. During practice runs, try out different foods.” She adds that runners should wait to eat an hour or two before a marathon to avoid any digestive issues, plus avoid fiber and fat right before a race.

RELATED: A Marathon Runner Who Pulled Over To Take A Dump 18 Miles Into US Olympic Trials Still Finished 6th Overall