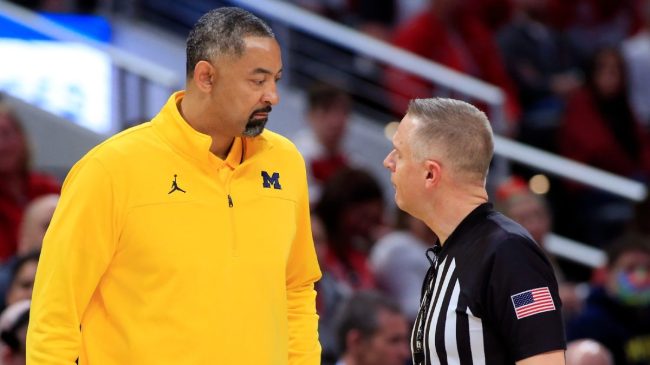 Actor Will Smith made headlines for all the wrong reasons at Sunday night’s Oscars ceremony.

The King Richard star slapped emcee Chris Rock in retaliation for a joke made at Smith’s wife, Jada Pinkett-Smith. After the shocking moment, viewers sat in awe of what had just transpired. Smith was then seen shouting obscenities at Rock, further compounding the situation.

The slap successfully threw a wrench in the Oscars event while causing quite a stir on social media.

One of the Monday morning reactions has trickled into the world of sports. More specifically, college basketball.

Folks on Twitter are now suggesting a new role for Smith, saying that he should play Michigan head coach Juwan Howard in an upcoming biopic.

For those that may have forgotten, Howard was suspended for the Wolverines’ final five games of the regular season for slapping an opposing coach in the handshake line following a loss to Wisconsin. Fans are jokingly proposing this new role, which could actually make for entertaining television.

And Smith isn’t new to the sports world. He was voted Best Actor for his recent role as Richard Williams in the movie King Richard, which details the upbringing of tennis superstars Serena and Venus Williams. He’s also starred in box office hits like Ali, Concussion, and The Legend of Bagger Vance.

If the idea of a Juwan Howard biopic ever does come to fruition, we know who should get the first call. Check out the social media reaction below.

Will Smith is just method acting for his upcoming Juwan Howard biopic.

Will Smith really went full Juwan Howard at the Oscar’s

Will Smith and Juwan Howard walk into a bar pic.twitter.com/2w3FVbJETH

Juwan Howard looks like someone tried to draw will smith from memory pic.twitter.com/FrzhIPDHsb

I look forward to Will Smith winning Best Actor for his portrayal of Juwan Howard in a biopic about the coach’s career. pic.twitter.com/yhoWYckhbC

Will Smith rehearsing for the Juwan Howard documentary

Will Smith nailed his audition for the role of Juwan Howard.

Will Smith just earned the lead role in the Juwan Howard biopic.

Will Smith auditioning for the role of Juwan Howard https://t.co/qgtnaaQ6le