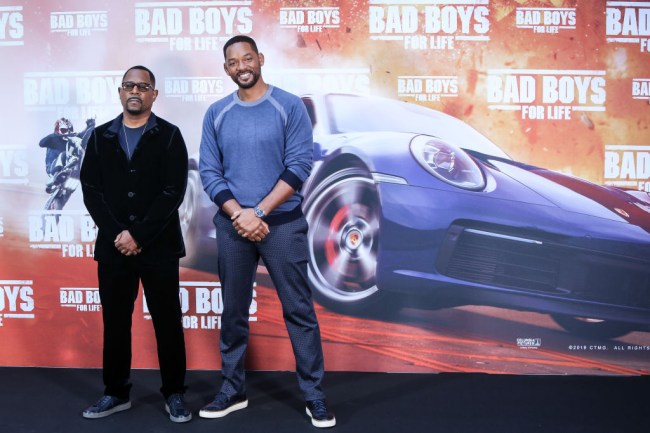 The original Bad Boys was released on April 7, 1995, and was a box office success, earning $141 million. It took eight years for Bad Boys II to hit theaters, and the buddy cop film made $273 million. On January 17, 2020, the world will finally receive Bad Boys 3.

So why did it take 17 years to make the third chapter? When asked why it took so long for Bad Boys 3, Smith said, “It was important for the culture. I just didn’t want to mess it up. I didn’t wanna do a cash grab. ‘Everyone’s doing sequels, ‘Let’s do one!’ If we’re gonna make a third one, it has to be deservant. There has to be messages and ideas. We gotta be talking about something. It’s not just blowing some stuff up and getting paid.”

Charlamagne tha God asked Will Smith and Martin Lawrence if they received the same pay on Bad Boys 3. Smith said, “Hell no!” to the rumors that he was getting paid $10 million more than Martin. Smith laughed it off and told the Breakfast Club host that “We’ve been talking for four minutes, you don’t go to that sh*t four minutes into the damn interview.”

Martin said the original Bad Boys movie was initially pitched to him and asked him to pick someone to co-star with him. Martin’s sister proposed the idea that he select the Fresh Prince of Bel-Air. Martin invited Smith to dinner and they had instant chemistry, they knew they wanted to work together.

“You can’t fake and you can’t buy chemistry, you either got it with somebody or you don’t,” Smith said of Lawrence. “There’s so much love and so much respect for each other.”

“Martin is one of the most authentic people that I have ever met,” Smith said of Lawrence. “Martin is as close to 100% authentic as anybody I’ve ever met. There’s no bullsh*t with this dude.”

RELATED: Will Smith Reveals That He Was Extremely Jealous Of Jada Pinkett Smith’s Love For Tupac – ‘Huge Regret Of Mine’

Gabriel Union isn’t in Bad Boys for Life, and she isn’t in it because “we took a different storyline,” according to Lawrence.

The actors were asked if Bad Boys 4 is happening, and Smith said, “We gonna let the audience decide.” On doing a fourth Bad Boys movie, Smith announced, “I’ll take half the money that it would be as long as I can have fun.”

Smith admitted that the biggest mistake of his incredible career was passing up the role of Neo in The Matrix to star in the box office bomb Wild Wild West.

RELATED: Will Smith Is Developing A ‘Fresh Prince Of Bel-Air’ Spinoff Series

Will talked about how his kids don’t see him as cool, and that he tried to ask his son Jaden’s permission to be on his second studio album, Erys. Jaden didn’t let his pops on his album, but he did have his sister Willow Smith on the album.

Smith talked about his friend Tyrese (You can read all about his drama HERE).

“Let me tell you something, me and Tyrese we been friends. That’s my dude. Tyrese is my dude,” Will said. “He calls me when he don’t want it cut. He want it raw and uncut.”

“The amount of talent and possibilities that that dude has is what I keep drumming in with him,” Smith continued. “Tyrese is functioning at 40 percent of the capacity of what he really is. And that’s another thing being brave enough to be who you really are instead of being Tyrese.”

Smith said that ever since he jumped out of the helicopter over the Grand Canyon, he has enjoyed “the best year of my adult life.” When Martin saw that Smith was bungee jumping from a helicopter, all he thought was: “When he jumped, I thought the movie wasn’t gonna happen. Awwwww… dammit!”