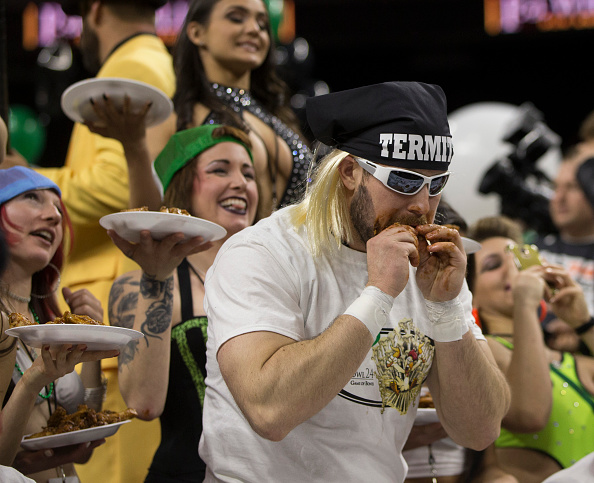 The Northeast doesn’t have anything like New Orleans, Las Vegas or even Broadway Street in Nashville. But the Northeast did have Wing Bowl, which nobody else in the world had. Sadly, the deliciously debaucherous Wing Bowl has ended. Pour out a Yuengling in the memory of the Wing Bowl.

Wing Bowl was created in 1993 by Philadelphia talk-radio hosts Angelo Cataldi and Al Morganti at the Philadelphia radio station WIP as a way to try to make the Friday before the Super Bowl into an annual holiday (and because Eagles fans usually had nothing to get excited for heading into Super Bowl weekend). And they succeeded for 26 years. Every year rowdy, intoxicated fans stumbled out of bed in the early hours of Friday to partake in this orgy of buffalo wings and debauchery. The event became such an overwhelming success that it was moved into the Wells Fargo Center in 2000 because so many people wanted to attend.

The Wing Bowl is one part celebration of the chicken wing, one part eating competition, one part gawking at scantily-clad women, and one part excuse to skip work in a concerted effort to get drunk on an early Friday morning.

On Tuesday morning, Cataldi made the mournful announcement that the Wing Bowl was canceled. Forever. “It’s official. Wing Bowl is over, after 26 amazing years,” Catalidi wrote on Twitter. “Thanks to everyone who made it such an amazing success.”

It’s official. Wing Bowl is over, after 26 amazing years. Thanks to everyone who made it such an amazing success.

A Philadelphia institution has been torn down. Those who have experienced a Wing Bowl first-hand will now only have the sweet memories of buffalo wings and boobies because there will be no more. The Wing Bowl was a magical place where you could flush your moral sensibilities out of your body at the same time as squeezing MD 20/20 and buffalo wings BMs down the porta-potty in the Wells Fargo parking lot because you’ve been tailgating since 4 AM.

The parking lot at the Wells Fargo Center was packed shortly after 4 o'clock this morning. Eagles fans are ready for Wing Bowl 26, including some from Northeastern and Central PA. Story coming today on @WNEP pic.twitter.com/Pj8fbV0zk9

No more chicken wing eating contests, no more Wingettes, no more drunken shenanigans, no more buckets of buffalo puke. If there is any solace in the ending of this illustrious tradition it is that the Wing Bowl ended on a high note as it preceded the Eagles winning their first Super Bowl championship two days later.

There have been some impressive competitive eating feats displayed at Wing Bowl. Molly Schuyler, a 127-pound mother of four, devoured a record 501 wings in only 30 minutes in this year’s Wing Bowl, destroying the second-place eater Dave Tiger “Wings & Things” Brunelli, who only ate a measly 396 wings.

Ever have 500 wings in 30 minutes for breakfast? 👀 pic.twitter.com/9glTAHPPa1

Kobayashi destroyed an entire cheesesteak at Wing Bowl 19 in a blistering 24.3 seconds.

After Charles “Eggman” Rifici was eliminated from the competition, he proposed to his girlfriend. Romance is not dead.

But there’s also been the celebrities and sports stars who have partied at Wing Bowl including Jon Bon Jovi, Lenny Dykstra, Jason Kelce, and Nicole “Snooki” LaValle.

Up Early And Ready To Have Fun At The Wing Bowl! WOOOOO! pic.twitter.com/zT4jG78eK0

In 2015, legendary wrestler Mick Foley entered the wing eating contest but was disqualified for sneaking chicken into his fanny pack.