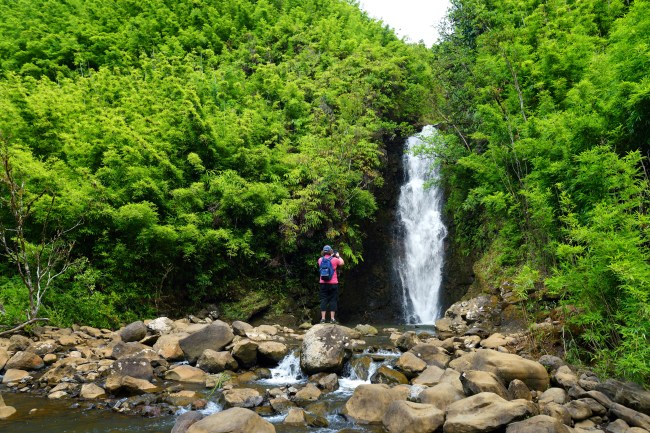 In the words of the great TLC: ‘Don’t go chasing waterfalls, because you might slip and fall 50 feet and nearly die.’

That’s the remix I think, and Heather Friesen knows all the lyrics.

The 26-year-old is now a successful beach volleyball player, which is a goddamn miracle considering what she’s been through.

Back in 2016, Heather survived a 50-foot plunge down a Hawaiian waterfall and the rocks at the Ka’au Crater Trail, but not before being airlifted off the trail and suffering 10 broken ribs, a collapsed lung, a fractured scapula (shoulder blade), and multiple wounds.

Oh, and she got the entire terrifying fall on her GoPro.

Heather recently appeared on the “In the World of Female Sports” podcast to discuss how the fall changed her life long after the extensive injuries healed.

She revealed that the cliche of “time slowing down” is true, and that her first instinct while falling was to protect the arm she serves with in volleyball. That thought changed from thinking how the fall would affect her family and her boyfriend (now husband).

“When I was on the helicopter being airlifted out, it was the most peaceful moment of my life,” she said. “I kept repeating to myself, ‘God’s got me, I’m going to be OK’ and that I’m going to play volleyball again.”

She added, “I found out there had been others before me who fell from the same spot and died, and I know that God saved my life that day.”

Standing on the edge of a waterfall is going to be a no for me, dawg. And I suggest you follow suit, internet stranger.