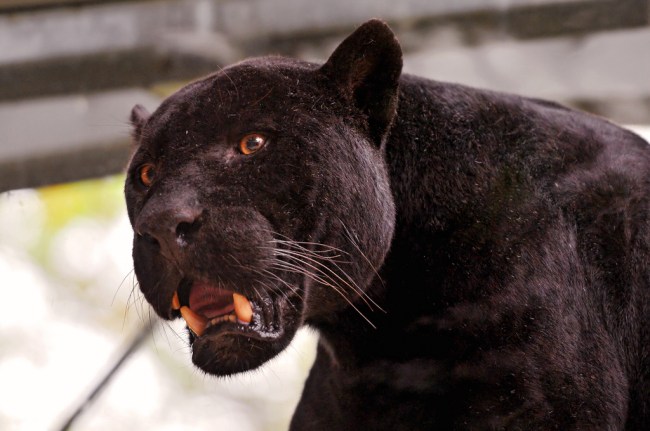 At least 259 people have died since 2011 while attempting to take a selfie according to a new study. So death by selfie is a real and dangerous thing. Unfortunately, people keep putting themselves in perilous situations for Likes on social media. The latest sad example of this unfortunate phenomenon is a woman who entered a jaguar exhibit to take a selfie.

We take you to the Wildlife World Zoo, Aquarium and Safari Park just outside of Phoenix, which is the largest zoo in Arizona. That is where one woman’s hunt for a “cool” selfie landed her in the hospital.

On Saturday, the woman crossed a barrier so that she could be closer to big cat simply for a photo. The female jaguar did not appreciate the stranger and took a powerful swipe at the woman, leaving a nasty wound on her arm. The jaguar’s sharp claws easily sliced the woman’s skin open.

Another visitor at the zoo, Adam Wilkerson, was the original person who helped the victim. “Without thinking, I had no idea what I was going to see, I just ran over there,” Wilkerson stated. “I saw the other girl up against the fence with her arm caught in the jaguar’s claws.”

Wilkerson said he “could see the claws in her actual flesh,” and knew that he couldn’t just pull her out of the enclosure. He had his mom distract the jaguar with a water bottle by pushing it through the jaguar’s cage. “When my mom put the water bottle through the gate, the jaguar let go of the girl,” Wilkerson said. “And we pulled the girl back and she collapsed.” Zoo employees rushed to tend to the woman’s serious injury and paramedics were called. The individual in the running for the Darwin Award was taken to the hospital and her condition is unknown.

A Phoenix woman suffers from injuries after a black jaguar swiped at her while she was taking a selfie. @TVMarci has the story. https://t.co/1ruDM6Q9U3 pic.twitter.com/80ksjVYNMu

“We regret to inform that this evening, before closing there was an incident reported involving a guest, who crossed over the barrier to get a photo, according to eye witnesses,” Wildlife World Zoo, Aquarium & Safari Park said in a statement. “The visitor sustained non-life threatening injuries to their arm from one of our female jaguars. At the request of the family, paramedics were called.”

“At no time was the animal out of its enclosure,” it added. “The incident is being fully investigated.”

Please understand why barriers are put in place. Sending prayers to the family tonight. pic.twitter.com/2MPb8bXhwR

RELATED: Girl’s Selfie Turns Into A Meme After Everyone Notices How Much Of A Slob She Is – Wait. Is That A Rat?

This is the second time in a month the same jaguar has swiped at a guest who crossed the barrier. Thankfully, cooler heads prevailed at the Wildlife World Zoo and there will not be another Harambe situation.

The zoo said the jaguar involved in the incident will not be euthanized because it is not the animal’s fault that a human crept into its environment. “We can promise you nothing will happen to our jaguar,” the zoo said. “She’s a wild animal and there were proper barriers in place to keep our guests safe- not a wild animal’s fault when barriers are crossed. Still sending prayers to her and her family.”

We can promise you nothing will happen to our jaguar. She’s a wild animal and there were proper barriers in place to keep our guests safe- not a wild animals fault when barriers are crossed. Still sending prayers to her and her family.

Adult jaguars can weigh as much as 200 pounds and are adept hunters. People really need to stop putting themselves in dangerous situations because they are “doing it for the Gram.”

Did you know…
WWZ was the first institution in the 🌎 to exhibit big cats above visitor’s heads starting in 1985 w/ the black jaguar exhibit. The jaguars benefited from the enrichment & our visitors loved it! #NationalTriviaDay #FunFact #Jaguar #Enrichment
(📷: L Fuentes) pic.twitter.com/rp8CN4dHt5

RELATED: Let’s Watch A Woman Destroy $200,000 In Art Because She Wanted To Take A Selfie