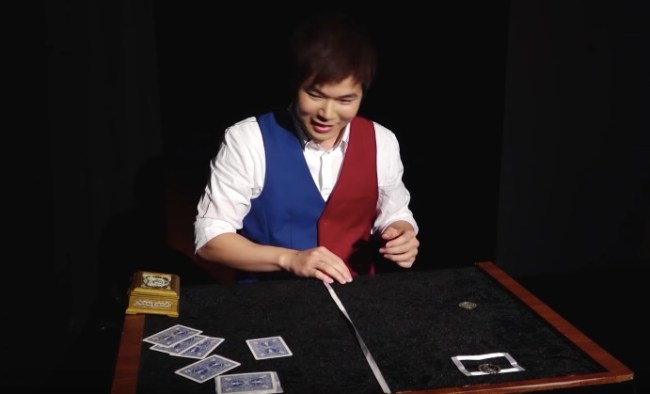 For the second time today I’ve found myself writing about magic and magicians and I really don’t know why. I think I’ve seen one magic show live in the past 20 years. I’ll watch the David Blaine specials on HBO and Netflix, and I enjoyed Justin Willman’s Magic For Humans show, but I’m beginning to think that I’m actually somewhat into magic after watching this video below.

Magician Eric Chien is a ‘close-up magician’ according to Gizmodo. I assume that’s pretty self-explanatory there because in the clip below the camera’s pinned right up on his hands as he completes a round of complete mindf*ckery and sorcery.

Normally, I won’t watch any clip longer than about ninety seconds on the Internet but I couldn’t stop watching this video the first time. Then I watched it again and again. I still don’t understand what’s happening and I feel like this is blatant disrespect to the human race for doing something we can’t wrap our minds around.

I watched this on repeat and still can’t see what’s happening in real-time. I thought I had a handle on what was going on and then he totally mindf*cked me.

Looking for more? This isn’t quite the same as above, but in this clip magician Justin Willman convinces a guy that he’s actually disappeared and it’s amazing.