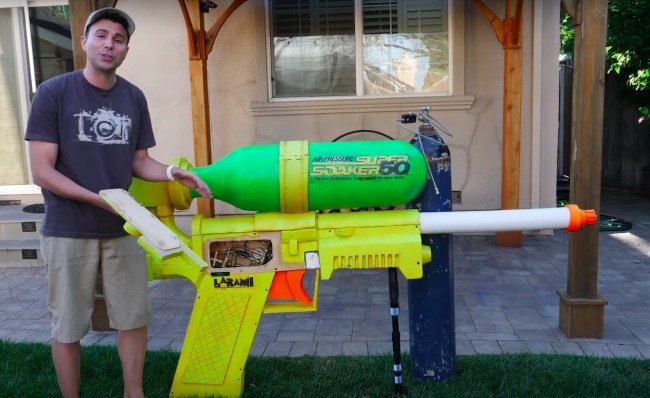 Water gun fights are an essential part of the summer experience— or at least they were until we were all forced to get jobs and lose the innocence of childhood in the process— and the closest thing kids have to an arms race is trying to one-up each other when it comes to having a Super Soaker that puts all the other water guns to shame.

However, even if you managed to have a top of the line gun that’s capable of shooting four streams of water 50 feet you still had to deal with the constant pumping and trips to the hose that left you totally vulnerable in the heat of battle. Former NASA engineer Mark Rober set out to solve this problem and did so by making an air-powered, seven-foot-long Super Soaker that could probably quell a civil rebellion.

After constructing the massive gun out of wood, Rober hooked up a couple of compressed air tanks to the water supply and in the process made a Super Soaker that packs the power of a pressure washer. Based on some of the objects he was able to destroy with the gun in a video documenting the process you do not want to be in its path when the trigger is pulled.

To put things in perspective, the Super Soaker is eight times more powerful than a fire hose so I have to give some credit to the people who were brave enough to be on the receiving end (especially based on the fact that he managed to shatter eggs and wine glasses with the stream).

I can only hope he follows this up by making the world’s biggest water balloon cannon.