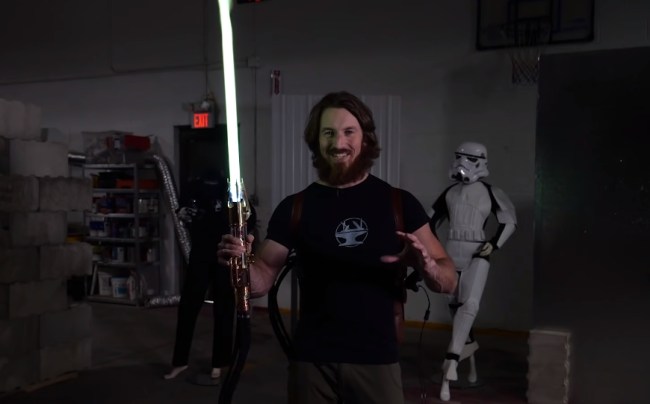 We humans love ourselves some lightsabers. Unfortunately, on our planet we don’t have kyber crystals, the power source for lightsabers. One ingenious individual used the elements at his disposal on Earth to create the world’s first retractable plasma-based lightsaber that burns at a titanium-melting temperature of 4,000 degrees.

James Hobson is the man behind the Hacksmith, a YouTube channel that attempts to recreate spectacular weapons and tech from movies. The Hacksmith has asked the question: Does Captain America’s Electromagnet Shield Work? Another viral video is Thor’s Stormbreaker DESTROYS ALL.

The Hacksmith has created homemade lightsabers inspired from Star Wars in the past, including one that burns at 2,500 degrees, 3,000 degrees, and one lightsaber that exploded.

In Hobson’s latest lightsaber creation, it is his most powerful Jedi weapon yet. This light sword is actually a protosaber and not a lightsaber. “Even with all of our new equipment and capabilities, we’re still bound by the laws of thermodynamics,” Hobson says in the video.

For the young padawan who are not well-versed in kyber saber technology, from Wookiepedia:

“Archaic lightsabers—commonly referred to as protosabers—were the first known design of lightsaber. Like later lightsabers, their focusing crystal was set inside a hilt from which a blade of energy was emitted. The main difference between protosabers and later lightsabers was that the hilt was connected via cable to an external power pack due to limitations in power pack technology.”

This protosaber is powered by propane mixed with oxygen. Hobson adds different salt, calcium chloride, and boric acid to change the color of the lightsaber: blue, green, yellow, red, and amber.

“We need a large array of laminar flow nozzles to create a highly concentrated flow of gas to create a plasma beam,” Hobson said in the video that has over 14 million views.

This is no toy. This homemade lightsaber can reach 4,000 degrees and burn through a solid metal door.