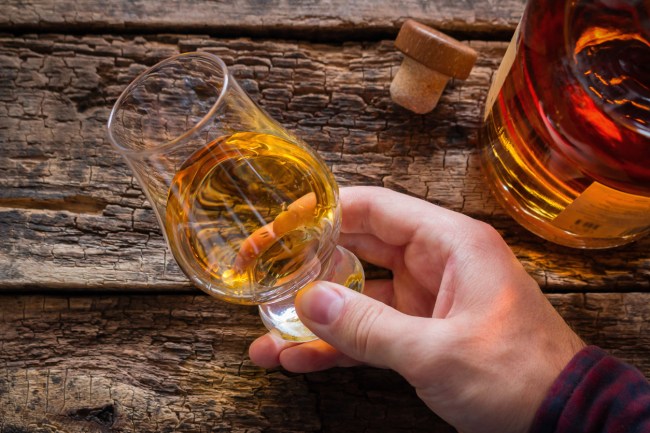 Have you been in search of a new hobby? Have you considered becoming a whiskey collector? There can be significant money involved in this hobby…if – this is a big “if” – you don’t guzzle your investment. One novice whiskey collector is about to profit on all his hard work of stockpiling massive quantities of liquid gold.

One man, who is only identified as “Pat,” starting collecting whiskey years ago. The bottles were to be opened, and shared with friends and family. Over the course of 15 years, his liquor collection grew and grew and grew – to the point that he owned 9,000 bottles and 2,000 miniatures of whiskey.

“I have always fought against whisky snobbery and wanted to create a collection for drinking and enjoying responsibly,” Pat said, according to the Robb Report.

After seeing whiskey collection going for millions of dollars, now is the time for Pat to cash in on his massive stash of liquor. Especially after seeing more than 1,600 bidders from 56 countries bid on 1,932 bottles of whisky in February. The Whisky Auctioneer’s sale of “The Perfect Collection – Part One” broke whiskey sales records and sold for an astounding $4,277,000. Some experts believe that Pat’s whiskey collection is worth even more.

Pat’s Whisk(e)y Collection is the single largest private collection of whiskey ever to be brought to auction, according to Whisky Auctioneer, which added that their team was in “awe of its diversity and completeness.”

There are whiskies from over 150 different Scottish distilleries, but there are also highly sought-after bottles from Japanese distilleries Karuizawa and Hanyu.

“With examples ranging from the mid-20th century to present day, the Collection reflects on whisky’s early pioneers and those transforming the market today,” the listing reads. “It is also the largest collection of complete or near complete individual series’ from varying distilleries that the team have encountered.”

“In addition to this will be several of the highly sought ranges collected by Pat, including an impressive offering from cult favorite farm distillery, Daftmill and some stunning aged expressions of Bowmore, Port Ellen, Caperdonich, and Highland Park from the Duncan Taylor Tantalus series, some of which have never been seen at auction before,” Whisky Auctioneer teased.

“Good whisky can be discovered literally anywhere and come at any price, wherein lies its beauty,” Pat said. “The significance of this wide range of whisky styles, from single malts to grain and blends, is that it’s unlikely anybody will ever be able to replicate such a collection on the open market without directly acquiring large private collections. Many bottles included will simply never or at least rarely be available again. I was fortunate to start my collection at the time I did.”

“The entire collection has an estimated hammer price of approximately $5 million, however the focus for starting the project was never on ultra premium priced whiskies,” said Iain McClune, founder of Whisky Auctioneer. “The value of the collection lies in its completeness, with many of the most lauded series from some of the finest distilleries in the world featured here in their entirety.

The first bottles and ranges from Pat’s Whisk(e)y Collection went on sale at Whisky Auctioneer on September 25, and will continue to be auctioned off through June 2021.