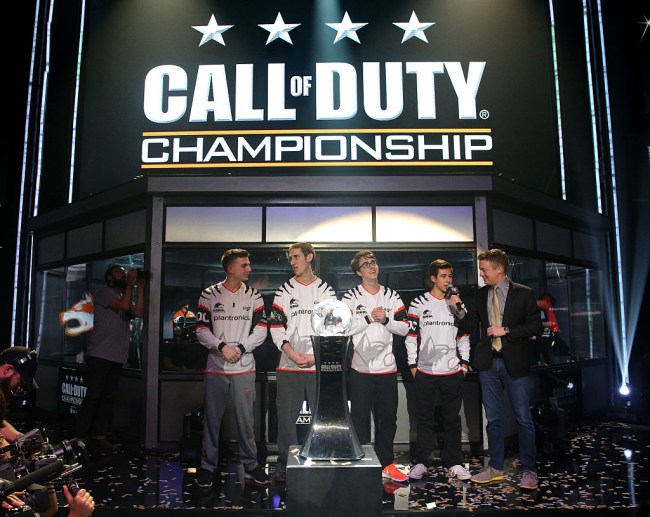 There was a glut of action in the sports world this past weekend; The Sweet 16/Elite Eight decided the fate of schools in the NCAA tournament,  Seth Rollins cashed in his Money in the Bank briefcase to win the WWE Championship at WrestleMania 31, the sports world inched one day closer to the NBA and NHL playoffs. But missing from that conversation is a spectacle that unfolded in a tent on a parking garage in downtown Los Angeles.

Thirty-two teams from around the world gathered to compete in the Call of Duty Championship. After three grueling days of electronic battle, Denial eSports earned the title of CoD 2015 Champs. The team walked away with a $400,000 check — each member $100,000 richer than when the tournament started.

On Friday night, shortly after arriving in L.A., I attempted to explain the Call of Duty Championship tournament to my Uber driver. His jaw dropped in astonishment when I told him about gamers playing for hundreds of thousands of dollars of prize money.

“These gamers are living the dream, playing video games and making money off it,” I tell him.

“My son would love it,” the 50-year-old admitted. “I need to tell him about it. Hope he can make money playing video games because it’s all he does with his friends.” Then the Uber driver pauses in amazement that it’s a legitimate career path for the most elite gamers.

“Damn… I wish something like this existed when I played pinball and Atri back in college,” he tells me. “I might be millionaire. I dropped out of college around the time I was gambling on pinball games at the arcade.”

Activision’s shooter series is easily one of the biggest and most profitable video game franchises of all time. Millions play its FPS multiplayer mode on the reg. Millions of players also livestream other people playing the game on Twitch and MLG.TV — a occurrence that South Park has delightfully mocked. Given its popularity, it makes sense there’s an annual tournament dedicated to the game’s best players.

From a macro level, the Call of Duty Championship is one of the major tournaments in the rise of eSports as a cultural phenomenon. The narrative for competitive gaming is growing, too, as the biggest stars are earning seven-figures a year and college leagues with real scholarships for students are starting to become established on campus. As a “sport” with true entertainment draw, its popularity is on the brink.

As an avid Call of Duty player (level 45 XP), I find the annual CoD Championship fascinating. I first saw it trending on Twitter a few years ago. Then I livestreamed the championship match for the first time on my Xbox last year. This year I had the opportunity to attend and watch it live.

I’ll be releasing a video here on BroBible documenting the entire experience. In the meantime, below are a few observations and takeaways from the event. I spent most of the weekend trying to wrap my head around eSports as a phenomena and what it means as a massive entertainment trend. Here are five conclusions:

1. Professional gamers have legit fans that are willing to travel to watch them compete.

Before Sunday’s championship match between Denial eSports and Revenge, I talked to two 19-year-old guys who traveled all the way to L.A. from Iowa for the tournament. They were not on a team or there to play. Rather, they aspire to be competitive-level gamers “someday”, but would rather watch the tournament in person than livestream it from their college dorms. They were sleeping on the floor of a friend’s dorm room at a college in L.A.

“It’s much better in person than streaming it online,” one of the Bros from Iowa tells me. He was ecstatic because he just took a selfie with Matt Haag a.k.a. OpTic Nadeshot, a competitive CoD livestreamer with over a million YouTube subscriber. His team, Optic Gaming, was eliminated earlier in the tournament. Despite the loss, Nadeshot is easily the Michael Jordan of eSports. Every time I spotted him on the tournament floor, he was taking a selfie with a fanboy.

Other fans I talked to traveled from Europe and Australia just to watch the tournament in person. Media from Germany, Britain, Italy, and Japan were in attendance to cover the results in real time.

While roaming around and talking to attendees, I chatted with a girl who traveled to the event from Florida. At the tournament, she quickly became friends with another girl equally-obsessed with Call of Duty. The two plan on teaming up and playing together in a squad when they returned home.

2. The money in eSports is LEGIT.

Over $1 million in total prize winnings was on the line for the Call of Duty Championship. The winning team, Denial eSports, walked away with a $400,000 check to split four ways. Mainstream sponsorships are starting to make their way to eSports, especially in the wake of Nadeshot’s endorsement deal with Red Bull. The purses and endorsements are positioned to grow as more eyeballs flock to eSports, too. Those gamers savvy enough to build followings on YouTube are also making amazing livings off advertising dollars.

3. There are eccentric personalities and storylines that have the potential to make eSports a WWE-style spectacle.

On Sunday afternoon, I met the owner of an eSports team called 3SupNation. When I told him I was with BroBible, he started boasting about how he was in a frat and the parties he hosts at clubs in Dallas. My colleague described his zanny purple zebra tie perfectly, noting that he “looked like Riff Raff vomited all over his suit and tie.”

“Everyone in here knows that I’m the 3 Sup Bro, I love eSports. Call of Duty is so Bro,” he told me. “We didn’t get very far in the tournament, but whatever. We’re still here having a blast.”

Gamers in the Call of Duty Championship are extremely civil. I saw very little trash talk. Since many of these gamers have identifiable personas on social media, leagues like Major League Gaming are in the perfect position to play up to the personalities of its players and owners. Fans follow the story arcs and drama on social media, which adds a level of WWE-style excitement for the tournaments and livestreams. Maybe someday my new friend from 3SupNation will make an excellent Ric Flair. He has the “stylin’, profilin’, limousine riding, jet flying, kiss-stealing, wheelin’ n’ dealin’ son of a gun” schtick down pat.

Many fans at the tournament were rooting for Optic Gaming. The most hardcore fans wear Optic Gaming shirts and hats. When Optic was knocked out of the tournament, many started cheering for Denial. With a championship under their belt, the team members from Denial — James “Clayster” Eubanks, Jordan “JKap” Kaplan, Dillon “Attach” Price and James “Replays” Crowder — are poised to grow huge online fan bases themselves.  Clayster, for example, currently has over 402,000 Twitter followers — a number that is only going to increase over the next few months.

4. The level of competition is no laughing matter. Teams are treated like pro sports teams, complete with owners, trades, etc.

Good luck getting into a tournament like the Call of Duty Championship as a casual gamer. The level of skill is INSANE — pro gamers move FAST, shoot with sharpshooter accuracy, and have remarkable kill-to-death ratios. They are well-oiled CoD machines. Major League Gaming has rules in place to ensure an equal playing field, such as playing with only the strapped-down versions of weapons in a game. I was also fascinated by how eSports works as a legitimate sports businesses operation. As business entities, individual teams have  ownership structures similar to pro sports teams. Some teams even have coaches who lurk over a team’s shoulder and yell information that a player might not see while concentrating on the game, like reloading a weapon. There are even strategic player trades between teams.

5. eSports are going to be huge.

eSports are already big, but the popularity seems to exist only in a vacuum of hardcore competitive gamers. Like my Uber driver in L.A.,  the public at large isn’t aware of the money involved or the niche celebrity status of these players… Yet.

All the pieces are in place for eSports to evolve. It’s just a psychological fact that watching other people play a game makes one CRAVE playing it. Casual gamers like myself are drawn to watching tournaments because of their own experience with a game. Personally, as a spectator who plays CoD, it heightens my appreciation for the game — The skill level, mental preparation, and raw gamer talent it takes to be an expert at Call of Duty is probably more than Malcom Gladwell’s proverbial 10,000 hours of practice. For the gamers good enough to compete, these tournaments are a stage to show others what it takes to dominate.

Sports purists may hate the idea of competitive video games being called “eSports,” but the name fits.  Will a killshot from the Call of Duty Championship ever make it into a SportsCenter Top 10 plays?