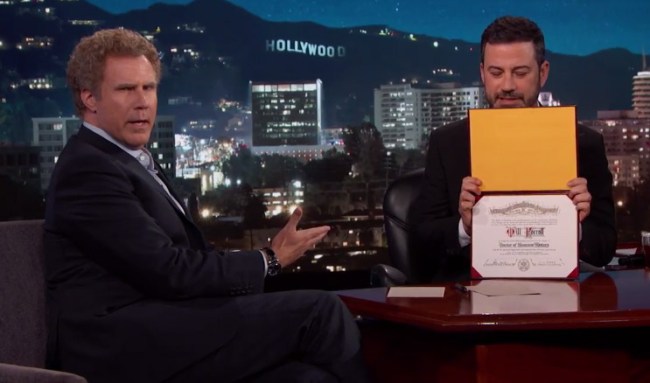 Last month we shared with you the laugh-out-loud video of Will Ferrell delivering the commencement speech at USC.

Ferrell, who received an honorary doctorate at the event dropped numerous funny jokes throughout his speech, including that fact that he had already instructed his wife and children that from this point on they have to address him as Dr. Ferrell. “There will be no exceptions, especially at our children’s various school functions, and when opening Christmas presents,” Ferrell added emphatically.

“The next time I’m flying and they ask if there’s a doctor on board, I can now confidently leap to my feet and scream, ‘I’m a doctor, what can I do? Yes, no problem, I can absolutely deliver that baby. Hopefully it will be on United Airlines, in which [case] I will immediately be subdued and dragged off the aircraft, which we all know will be recorded on someone’s iPhone and put on YouTube.”

The true highlight, however, (and there were many) was the way Ferrell decided to close out his speech by belting out the Whitney Houston classic “I Will Always Love You.”

Check it out below…

On Wednesday night, Ferrell made an appearance on Jimmy Kimmel Live and the subject of his USC commencement speech as well as his new doctorate were brought up.

“They gave me an honorary doctorate, so I’m allowed to perform elective surgery whenever I want,” Ferrell informed Kimmel. “I’ve done 10 tonsillectomies, a couple gall bladders, I think? I don’t know! I just cut in there and start tearing things out, put some scotch tape, get the hell out of dodge!”

He also went on to explain his unique decision to close out his commencement speech with a Whitney Houston song.

“As you know when you’re writing anything on the computer, it’s five minutes of writing and then forty minutes of searching YouTube for whatever,” said Ferrell. “And I landed on the video for The Bodyguard… and I thought, oh, that’s how I’ll end my speech.”

Makes perfect sense to me.