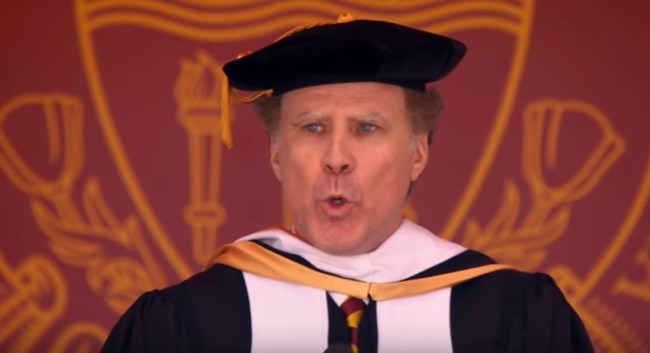 With honorary doctorate in hand, Will Ferrell keeps the laughs coming for USC grads in commencement speech. Story: https://t.co/um6dGAwond pic.twitter.com/CZh41kPhvr

On Friday, the comedic actor spoke to the graduating class at the University of Southern California. Ferrell, who is a USC alum, received an honorary doctorate before his speech.

“I’ve already instructed my wife and my children from this point they have to address me as Dr. Ferrell,” the actor said. “There will be no exceptions, especially at our children’s various school functions, and when opening Christmas presents.”

“The next time I’m flying and they ask if there’s a doctor onboard, I can now confidently leap to my feet and scream, ‘I’m a doctor, what can I do? Yes, no problem, I can absolutely deliver that baby,’” Ferrell said. “Hopefully it will be on United Airlines, in which [case] I will immediately be subdued and dragged off the aircraft, which we all know will be recorded on someone’s iPhone and put on YouTube.”

Ferrell gave some words of wisdom to the graduates.

“Enjoy the process of your search without succumbing to the pressure of results,” Ferrell told the students. “Trust your gut. Keep throwing darts at the dartboard. Don’t listen to the critics and you will figure it out.”

Comedian Will Ferrell serenades USC's Class of 2017 with Whitney Houston's "I Will Always Love You" after dropping some words of wisdom. pic.twitter.com/yIZCufzGUB

Will Ferrell capped off the ceremony by serenading the graduating class with an a capella version of Whitney Houston’s “I Will Always Love You.”

Dr. Will Ferrell ('90) serenades @USC's graduating class of 2017 to Whitney Houston's "I Will Always Love you" after beautiful speech. ❤️💛 pic.twitter.com/PTiGaqdMhl