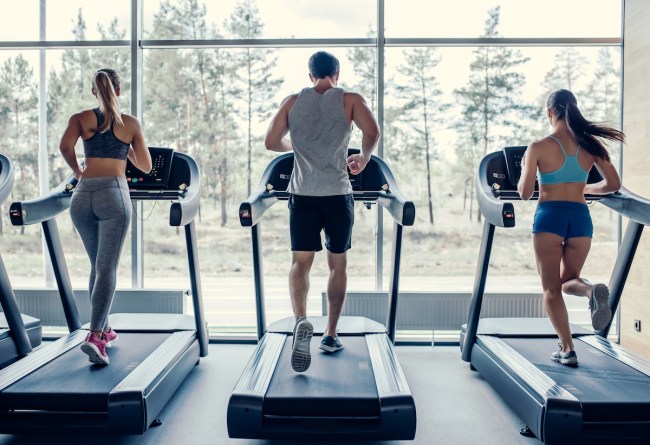 Cardio machines offer countless options for working out. All you have to do is push a couple buttons and start moving.

The best part is that when you finish the machine will spit out all the stats that make the slogging on the treadmill, recumbent bike and elliptical worth the time and effort.

There are miles, time and estimated calories burned. There is, however, a popular feature on most cardio machines that’s a complete lie.

There’s no such thing as a “fat burning zone,” according to the helpful folks over at LifeHacker.

All of the cardio machines are lying to you. There’s probably some workout on the elliptical that promises to keep you in the “fat burning zone,” and a chart on the treadmill informing you that the zone exists when your heart is beating at a certain rate. Forget it. The fat burning zone is a myth.

Those machines will tell you the zone exists somewhere in the range of 50 to 75 percent of your maximum heart rate (which it is probably miscalculating anyway). There is nothing special about exercising in this zone, and it certainly won’t make your body burn more fat than exercising any other way.

Damn you, treadmill! I thought we had a good thing going!

LifeHacker explains that anytime we’re working out, we’re essentially burning fat. Fat and a bunch of other stuff.

Fat burning is efficient, but it supplies slow and steady energy. If you need to work really hard, really fast (think: a tiger bursts into the bathroom and you have to run) you’ll use other energy sources, including some of the sugar that your muscles store for exactly this reason. Fat is still getting burned in the background, but it’s not the major energy source for this, say, 60 seconds of run-screaming-from-a-tiger effort.

If you’re on a cardio machine at the gym, your body is using a mix of the two fuels: the baseline amount of fat burning has maybe ramped up a little bit, but a good bit of your energy comes from burning other fuels, including that stored sugar called glycogen.

In other words, we’re always burning fat. Even while not moving. Sitting on your ass and reading this article puts you in a “fat burning zone” just as much as cardio does. You just burn more calories on an elliptical, obviously.

So what should a person do to burn a decent amount of calories without looking like a slow-moving hamster?

“If you want to improve your overall fitness,” LifeHacker suggests, “spend time in all the zones: some easy cardio, some medium, and some intervals that dip into the highest effort levels.”

If you really want to ramp up the fat loss after your workout is finished, try these 4 metabolic finishers instead of a boring cardio machine.