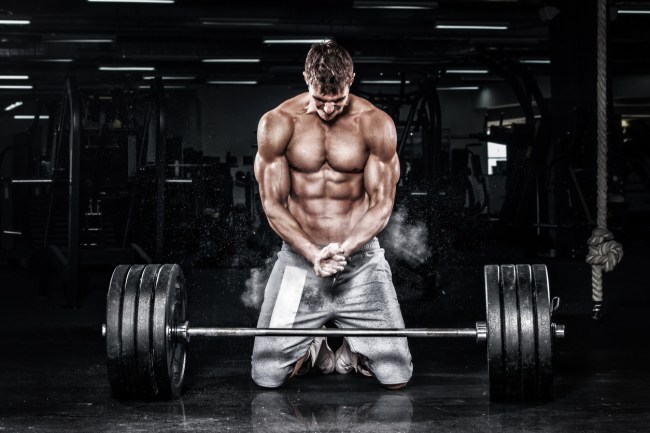 We’ve all seen the guy: He’s probably wearing an affliction t-shirt and wrist wraps on the bench press. He picks the bar up, and faster than you snap your fingers, the bar barrels towards his chest before bouncing off his sternum. Sure, he eeks out a few reps before puffing out his chest and strutting around the gym–but he’s not fooling anyone. He’s neglecting one of the most important training tactics for building muscle and strength–eccentric strength.

What is Eccentric Strength
The eccentric portion of a weight lifting rep is the lowering or negative portion of the lift. All of us our stronger eccentrically (on the way down) than concentrically (on the way up), yet most lifters neglect to pay attention to their negatives. Instead of controlling the eccentric, they speed through it, leaving muscle and strength by the wayside while increasing their chance at injury. Let’s avoid that, shall we?

Three Reasons To Focus On Your Eccentrics

If you can’t control the weight during the eccentric with sub-maximal weight, your form will surely break down under near-maximal loads. We see this all the time when an overzealous lifter attempts a near-maximal lift and ends up on one of those lifting fail videos.

A better option is to control each rep “down” for 2-4 seconds to build a base of strength. Most missed reps (and injuries) begin and end with a lack of control when transitioning from the eccentric (lowering) to a concentric (lifting) portion of a lift.

Picture the guy from before. He lowers the bar to his chest, but rapidly loses control halfway down, bounces it off his chest, and barely finishes the rep.  This lack of stability and motor control within that range of motion minimizes his performance and increases risk of injury.

Do this instead: Take 2-4 seconds “down” on each rep. You should be in control at all times. Over time you’ll get stronger, more stable, and prevent injuries.

2. Build Muscle Faster
If you’ve ever used timed sets or extremely high-rep sets, you’ve felt the power of more time under tension. When you control the eccentric on each rep, you’ll putting your muscles under more tension for a longer duration, both of which increase the muscle building response in your muscles.

This isn’t just broscience, bro. Research shows that eccentric training causes increased micro-trauma of the muscle fibers, which in turn can lead to increased muscle growth. As long as you’re eating for a caloric surplus and sleeping 6-8 hours per night, slowing down the speed of your reps can cause greater muscular stress and faster muscle growth.

Do This instead: Rather than speeding through your reps, use 2-4 seconds on each eccentric, especially on higher-rep sets and isolation exercises like curls. Yes, you’ll have to drop the weight and yes, you’ll be sore. Fortunately, you’ll also build muscle faster.

3. Improve Your Focus
Let’s be real: we all have workouts where we just go through the motions. Maybe we’re thinking about work, yoga pants, or simply not feeling it. Luckily, focusing on the eccentric portion of your lifts can keep you mentally engaged.

Slowing down the speed of your reps allows you to focus on the quality of each rep. With this focus, you’ll remember to push your knees out on a squat, keep your butt on the bench while you bench, and improve the quality of every movement. Not only will your workouts be more productive, they’ll also be safer.

Second, you’ll improve your mind-muscle connection. The biggest obstacle most lifters face when trying to build a stubborn muscle is “feeling” it work. Unfortunately, once you’re past the beginning stages of training, you’ll need to feel a muscle contract if you want it to grow. IN this case, slowing down your rep speed is the best way to get more out of each rep.

Do This: One each exercise, do one set where you take 3-5 seconds to lower the weight while pausing on the bottom of the rep. Doing so will allow elastic energy in your tissues to dissipate, requiring you to hold position and generate force with your muscles, not your ligaments.

More From Eric Bach On BroBible:

Why You Should Work Out More Often

4 Ways To Dominate Workouts While Traveling, Even If The Hotel Gym Is Trash