‘The Mountain’ From ‘Game of Thrones’ Lost 110 Pounds, Looks Ripped AF As He Readies For Boxing Match 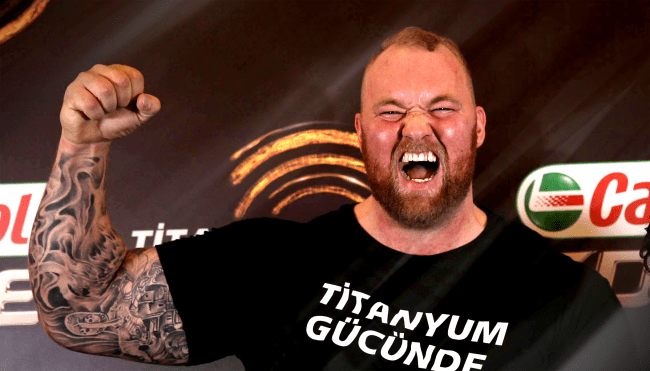 Hafthor Bjornsson, AKA “The Mountain” from Game of Thrones, was supposed to fight fellow strongman Eddie Hall in a boxing ring on September 18th.

“The next year and a half of my career will be solely dedicated towards this fight,” Thor wrote on Instagram 57 weeks ago.

Related: ‘The Mountain’ Made His Boxing Debut Against A Guy Who Weighed 120 Pounds Less Than Him

Instead, Thor will be boxing the current world’s number one ranked arm wrestler Devon Larratt, a former member of the Canadian Special Forces.

The combination of Bjornsson’s retiring from strongman competitions after winning his 10th consecutive Iceland’s Strongest Man competition in August 2020, plus his new training and diet regimen for the upcoming boxing match, has resulted in “The Mountain” dropping 110 pounds.

The 32-year-old recently told Men’s Health UK, “I’m extremely happy with my shape right now. When I started this journey, I weighed 205 kilograms. And now I’m down to 155. Feeling good, feeling healthy.”

Not only that, the 6-foot-9 behemoth now looks considerably more shredded than at any point during his strong man career, looking more like The Rock than The Mountain.

“Training done!” he wrote on Instagram this week. “Hard work pays off! I constantly keep proving that to myself! Set yourself goals and go after them!”

Bjornsson, who just completed his training camp in Dubai, somehow now looks even scarier than he did before.

This is not a man to be trifled with, folks.