Study Finds Those Who Exercise Regularly Are Happier, And Make More Money, Than Those Who Don’t 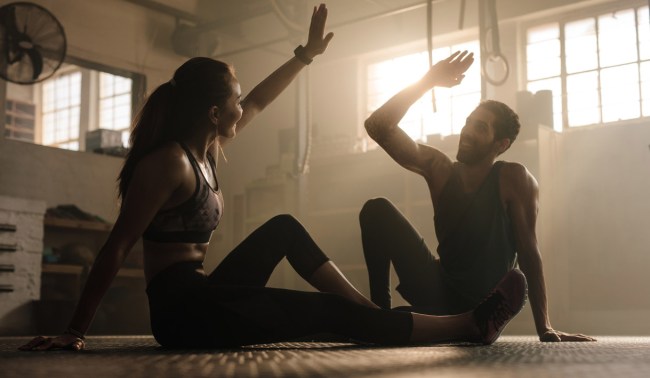 If you’re not entirely happy with your life, regular exercise may be the key to your success, according to research. A new survey of 2,000 Americans examined the correlation between physical activity levels and lifestyle impacts and found that those who make exercise a regular habit are happier and make more money than those who do not.

What it found was that exercise can have just as big an effect on your bank account as it can on your health and well-being.

The results also split the 1,000 respondents who regularly exercise by how they described their typical workout and it revealed that those who have a higher intensity workout tend to be more well-off in the salary department as well.

If you consider yourself somebody who typically does a low-intensity workout, throwing some HIIT (high-intensity interval training) sessions into your normal routine could stand to net you an extra $13,000 a year on average, according to the data.

But money isn’t the only area of your life that can benefit from regular exercise, because, according to the results, those who say they exercise regularly also have more sex.

Attitude and mentality are further aspects of life that are greatly affected by a regular exercise routine, with those who exercise regularly being more likely to consider themselves confident, goal-oriented, and risk-takers.

“The survey findings are a strong indicator that people now feel the holistic effects that fitness can have on their lives and not just their bodies,” says Daniel Sobhani, CEO at Freeletics. “It goes a long way beyond perfect abs and gym selfies – fitness has the power to unleash people’s true potential and help them in all aspects of life, giving them the confidence and willpower to achieve what they’ve always wanted to and to get more out of life.”

“If we look more closely at the mental effects that fitness has, we can even see that those who exercise regularly were also more likely to rate their own happiness level a 10 out of 10 than those who don’t exercise. This truly underlines the fact that the positive effects of exercise go far beyond the purely physical aspects many focus on,” Sobhani continues.

Those who never work out are, on average, also a lot less sociable, with 41 percent saying they strongly disagree with the statement, “I prefer going out than staying home on a Saturday night.”

In addition, people who never work out tended to perceive themselves as less optimistic and only seven percent strongly agreed with the fact that they led a fulfilling life, compared to 30 percent of those who exercise often.

The survey also went on to explore what people consider the biggest signs that somebody has their life together and found that owning a house was the top sign of having your life in order (50 percent). 43 percent said following through on plans was a top sign, followed by, you guessed it, having a regular exercise routine (38 percent).

“We are very pleased to see that the survey’s overall findings confirm our belief that exercise and a healthy, holistic lifestyle contribute to an all-round better quality of life. For us at Freeletics, fitness is about more than getting a six pack. It’s about living a better life and becoming the best version of yourself – both mentally and physically. This survey certainly shows that we are on the right track,” Sobhani concludes.