Woman Sets The Record For Most Burpees Done In 60 Minutes, But The Internet Is Calling B.S. 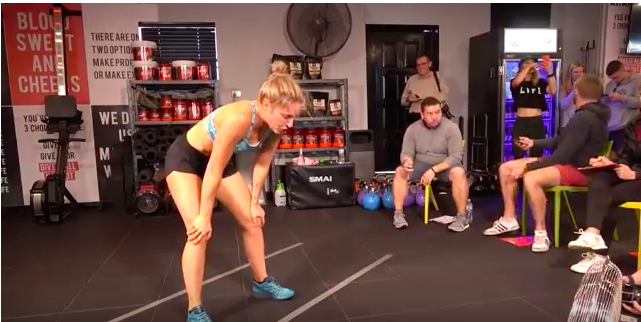 We’ve all got that one friend who claims to rep an egregious amount on the bench press despite his arms resembling wet strands of linguine. When you finally work out with him and after he confidently stacks on the weights and takes an aggressive manspread on the bench, it becomes apparent–DJ Khaled goes down more than he does. The bar drops a total of six inches before he powerfully returns it to apex. When you call him out, he blames it on a shoulder injury he acquired in high school that he’s never mentioned and didn’t require surgery but lingers a decade later. Those people can take their pink dumbbells and get out of my face forever.

Now imagine that same friend and how insufferable he’d be if he acquired the title of ‘World Record Holder.’ That would suck.

That brings me to the story of Liz Llorente, a 37-year-old personal trainer from Australia who recently set the world record for most burpees completed by a woman in 60 minutes.

For those unfamiliar with what constitutes the full-body aerobic exercise, it is typically defined in four steps.

A Melbourne mum has smashed the world record for the most burpees in 60 minutes by a female. 37-year-old Elizabeth Llorente trained for three months leading up to the feat, soaring past the previous best of 1321 with her 1490-burpee effort. #7News pic.twitter.com/pca4S00HOT

If those look a bit off to you, you aren’t the only one.

All for fundraising for charity but these are not burpees by any standard.

Agree….hands above the head and jump..what about the push up.. great effort..but I could do that too..

Not even close to a burpee..no rep no rep etc…

According to Fox News, The Guinness World Records enforces a starting position of hands and feet in a plank position and transition into a jump with hands and feet both removed from the ground. It does not state that the person must stand upright and there are no stipulations on how far off the ground one’s hands must be.

“I definitely know what a burpee is,” she said in an interview with the Washington Post.

To give credit where it’s due, 1,490 anything in an hour is ridiculously challenging–including 3/4 burpees. Plus, if you ain’t cheatin’ you ain’t trying.