#ford bronco
BroBible may earn a commission if you buy a product or service via links in this article.
by Brandon WenerdJuly 13, 2020
Facebook Twitter Reddit Flipboard 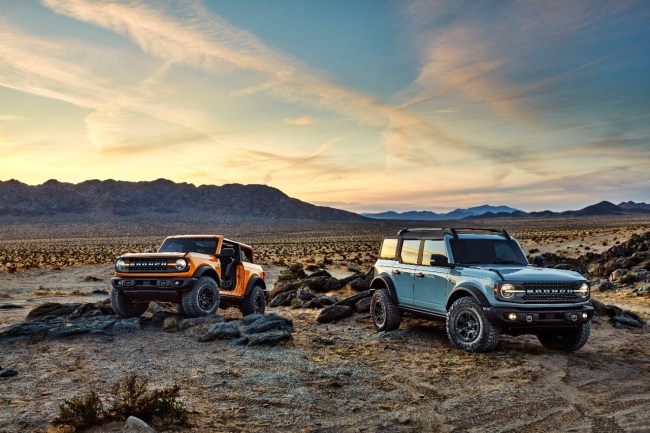 It’s been a long, long time since the automative world has seen a new SUV. The market has been dominated by mostly Jeep and Toyota, along with family-sized mainstays like the Ford Explorer, Chevrolet Suburban, and Land Rover.

After years of hype and unofficial leaks from Bronco enthusiasts, the Ford Motor Company has finally pulled back the curtain on the next generation of the Ford Bronco.

The 2021 Ford Bronco is the first Bronco to hit Ford’s production line in 24 years.

And boy, did Ford deliver.

It’s a big deal in the off-roading and overland community; Finally, a proper Made-In-America 4×4 engineered to go head-to-head against the Jeep Wrangler and Toyota 4Runner, with some of the design flourishes of the discontinued Toyota FJ.

There’s a reason the Ford Bronco has become such a beloved truck for both beach cruisers and desert rats.

One trim level of the 2021 Ford Bronco even includes a “segment-exclusive” 7-speed manual transmission, making for a truly old school, intimate driving experience.

Unlike the Jeep Wrangler, the 2021 Ford Bronco features an independent front suspension. Ford insists this is better for getting the Bronco dirty with high-speed off-roading and desert driving (… like the racers in the Mint 400 and Baja), along with enhancing the Bronco’s bouldering ability. There are two 4×4 systems that feature two-speed transfer cases with the flick of a dial. One version of the 2021 Bronco even includes a full-time 4×4 setting.

Just look at the Bronco bounce from the independent front suspension:

According to Ford, the new Bronco will be available in six trim and equipment levels, with a price tag starting at $29,995. Some of the suspension con are available, including a package that Ford is calling the “Sasquatch” package with 35-inch tires and a stabilizer bar. Ford claims the Sasquatch Bronco delivers 11.6 inches of ground clearance and can drive through 33.5 inches of water, making it a serious competitor with other overland SUVs.

And Ford’s G.O.A.T. modes are going to make off-roading all the easier, if not borderline dummy proof (…but you should probably still know what you’re doing out there before you hitting up a treacherous remote BLM trails, mmkay?).

via the Ford press release:

“Bronco’s advanced four-wheel-drive technology is at the core of its off-road capabilities, and at the heart of it all is Bronco’s exclusive Terrain Management System™ with G.O.A.T. Modes™ that is designed to help drivers better navigate any type of terrain,” said Mark Grueber, Bronco consumer marketing manager.

Up to seven driver-selectable modes are offered including Normal, Eco, Sport, Slippery and Sand, with Baja, Mud/Ruts and Rock Crawl for off-road driving.

Two 4×4 systems are offered on all Bronco models, a base setup and advanced 4×4. The base system utilizes a two-speed electronic shift-on-the-fly transfer case, while the optional advanced system features a two-speed electromechanical transfer case that adds an auto mode for on-demand engagement to select between 2H and 4H. Power is distributed to a Dana™ 44 AdvanTEK® solid rear axle and Dana AdvanTEK independent front differential unit – both with available Spicer® Performa-TraK™ electronic locking differentials for improved traction over rough terrain.

Bronco buyers can choose between a soft or hardtop; the four-door model can be optioned with both. Some options include stowable roof panels. On four-door models, all four doors on the Bronco be stored onboard with protective door bags, similar to Jeep Wrangler. 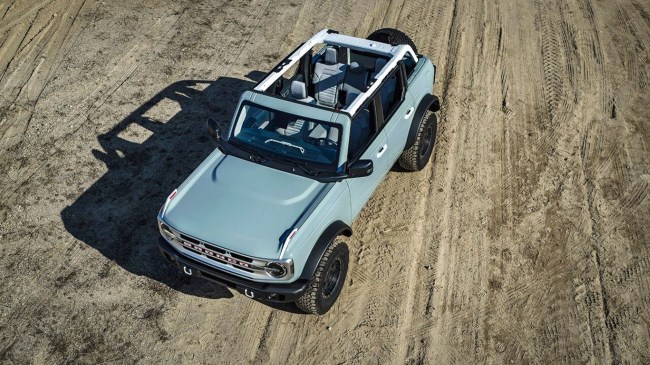 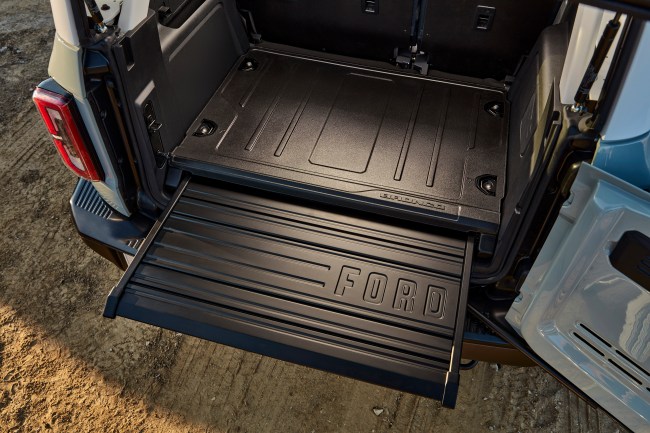 The new Bronco is intended to be fully customizable for overlanding and off-roading, with over 200 dealer-installable accessories.

According to Ford, the new Bronco series ranges from a base Bronco – a no-frills SUV for those who want to customize their own, to bigger build outs such as the Big Bend™, Black Diamond™ and Outer Banks™ with a variety of options and colors, topping out with Wildtrak™ and Badlands™ for more extreme off-road adventuring. A limited-production First Edition™ will be offered at launch. 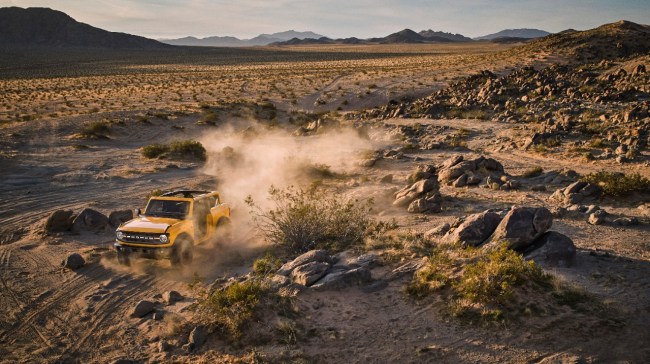 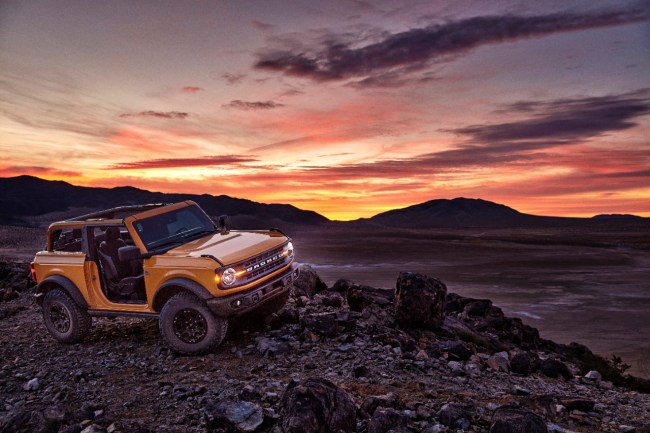 The all-new 2021 Bronco two-door and four-door models will be built at Michigan Assembly Plant in Wayne, Michigan.

Reservations for Bronco two- and four-door models can be made for $100 beginning at 8 p.m. EDT today at ford.com.

Shut up and take my money. Words can’t contain my excitement. As a long time fan of the OG Broncos, I’m ready to trade my Jeep in tomorrow.

Here’s the reveal video, which will make you want to run through a wall. Or, at the least, plan your next overnight adventure in the Mojave Desert: