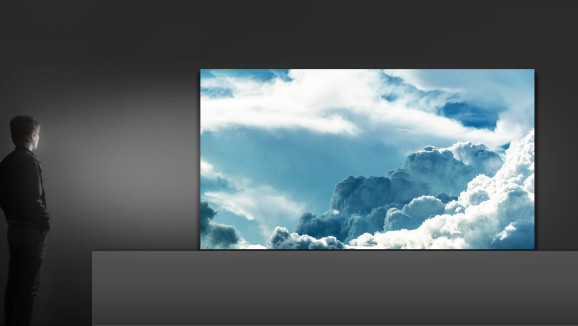 The 2018 Consumer Electronics Show officially kicked off on Monday, but we have already seen some incredible televisions such as the world’s first 88-inch 8K OLED TV and a 4K portable projector that can beam a huge 150-inch picture onto nearly everything. Today we get a sneak peek of Samsung’s insanely gigantic 146-inch display nicknamed “The Wall.” Game of Thrones may have a copyright infringement lawsuit on their hands.

The Wall is a MicroLED television that utilizes Samsung’s Cinema Screen technology and uses millions of tiny, individual LEDs to create the image. This home TV is very similar to the technology used in scoreboards and jumbotron screens. The 146-inch TV is not only ginormous, but it is a modular TV, meaning it can become even more ginormous. Samsung said, “Users can add or remove modules to make their TV bigger or smaller, in any configuration, removing previous limitations on screen size, with zero impact on performance of the display.” The TV is 12-feet-wide, how much bigger of a TV do you need? At 146-inches, the TV pretty much spans from floor to ceiling on a normal room.

The gargantuan TV as well as other 2018 Samsung televisions from the South Korean tech giant will also include support for its Bixby virtual assistant. The televisions will also include SmartThings home automation platform. Samsung said The Wall would be available this year. As for the price of this home jumbotron, Samsung did not reveal the price. Check out more tech from the CES 2018 HERE.

Samsung introduces a 146-inch modular, MicroLED based TV it calls The Wall. Now we're left to guess what's Beyond The Wall. pic.twitter.com/SrwFFPjNke