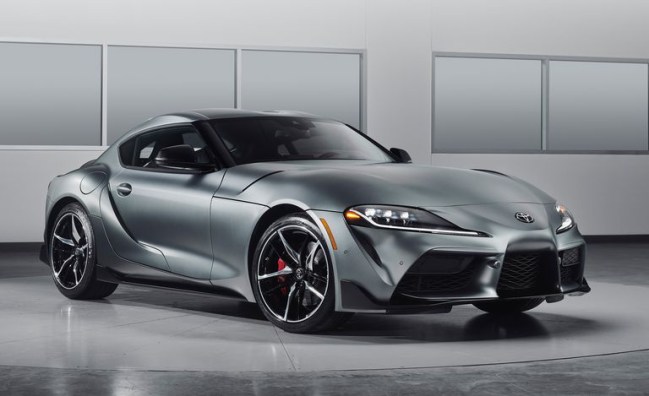 The brand new 2020 Toyota Supra was only unveiled a week ago, but the very first model ever manufactured was auctioned off on Saturday and the sports car sold for an insane amount of money.

Besides being the first 2020 Supra to ever be sold, this is a super special edition 2020 Supra because Toyota only made one like this one. The one-off Supra feautres the Phantom Matte Gray exterior with the Launch Edition’s gloss red mirrors, black wheels, matte black wheels, and red interior. The vehicle also comes with the VIN 20201, as well as race shoes, custom racing suit, gloves, a helmet, and two VIP passes to the Toyota Owners 400 NASCAR race in Richmond, Virginia in April.

Getting your hands on this one-of-a-kind Supra would be tremendous, but how much would you pay for this special car? Keep in mind that 3.0 Supra has a price tag of $50,920 and the upgraded 3.0 Premium has an MSRP of $54,920 (More about the different 2020 Toyota Supra trim levels HERE). It turns out that the value for this one-off 2020 Supra is… brace yourself sticker shock a-comin’… $2.1 million.

Now THIS is one super Supra! It was an incredible Barrett-Jackson moment when a winning bid of $2.1 MILLION brought the gavel down on the rights to the very first 2020 @Toyota Supra, VIN 20201, to benefit the @American_Heart Association and @Stand4Heroes. pic.twitter.com/cgUbpMdUqv

The awesome part about that preposterous amount of money is that 100% of it went to charity. At the Barrett-Jackson Auction in Scottsdale, Arizona on Saturday night, the lucky anonymous owner of the super Supra donated $2.1 million to the American Heart Association and the Bob Woodruff Foundation to support veterans and service members.

For comparison, the first 2019 Ford GT Heritage sold for $2.5 million at the Barrett-Jackson Auction, which was donated to the United Way. The first 2020 Ford Mustang Shelby GT500 sold for $1.1 million, which was donated to the Juvenile Diabetes Research Foundation. Do you even drive a $2.1 million car or do you keep it locked away in a garage somewhere so it doesn’t lose its value? These are good problems to have.