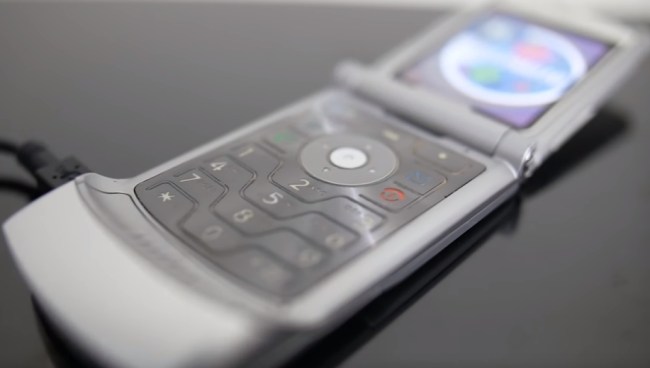 Turn off Spy Kids, stop playing Dance Dance Revolution, put down your box of DunkAroos, and jump into your Rocawear velour tracksuit because you need to get this brand new phone that is coming out very soon. Motorola is set to release a new Razr phone. No, this is not an article that accidentally got published ten years after it was supposed to.

According to a report by the Wall Street Journal, Motorola is working on an up-to-date smartphone version of the company’s iconic Razr phone that debuted way back in July of 2004 because everything old is new again. Motorola Mobility, which is now owned by Lenovo, will reportedly release a brand new Razr in the very near and the modern flip phone will have a hefty price tag of $1,500.

Motorola will attempt to replicate the enormous success of the original Razr V3 cellphone that was technologically advanced at the time and became a pop culture icon. The original V3 sold over 130 million units in four years, becoming the best-selling clamshell phone ever. The Razr was the “it” phone at the time before the Apple iPhone arrived to change the marketplace. In 2011, Google purchased Motorola Mobility for $12.5 billion, but then sold it off to Chinese tech company Lenovo in January of 2014 for $2.91 billion. Here is a commercial for the Motorola Razr that made everything seem like it was a Transformer.

According to the report, Motorola filed for a patent in May of 2017 in reference to a clamshell-shaped handset that will have a flexible screen that folds inward. You can see designs of the patent HERE.

Motorola filed patent app that shows foldable phone. Design brings Moto RAZR to mind. Shows how display will fold, by hinge in middle. Hinge will allow phone to fold like the RAZR, & will make sure it leaves enough of a curvature so display doesn't bend all the way pic.twitter.com/jif46TCCg5

Motorola Mobility will allegedly only produce 200,000 of the new Razr phones and it will initially be an exclusive release with Verizon Wireless. Rumor has it that the modern Razr could be available as soon as February. The report did not offer any specifics or specifications on the new Razr.

When Motorola was asked if they were making a new version of the Razr, the tech giant responded with a shrug emoticon “¯\_(ツ)_/¯.”

So I asked @MotorolaUS for comment on today’s WSJ report of the Razr making a comeback. This was their response: pic.twitter.com/HIMdt5VJp1

Motorola has attempted to bring the Razr back from the flip phone graveyard on two occasions with limited success: back in 2007 and an Android smartphone model in 2011. Back in the summer of 2017, Samsung introduced their own version of the Motorola Razr named the Leader 8. Samsung is set to release a folding smartphone later this year and Apple is reported to debut their folding phone in 2020.

Here is a current-day review of the iconic Razr phone.