#Tech
BroBible may earn a commission if you buy a product or service via links in this article.
by Paul SaccaFebruary 25, 2018 8:49 pm 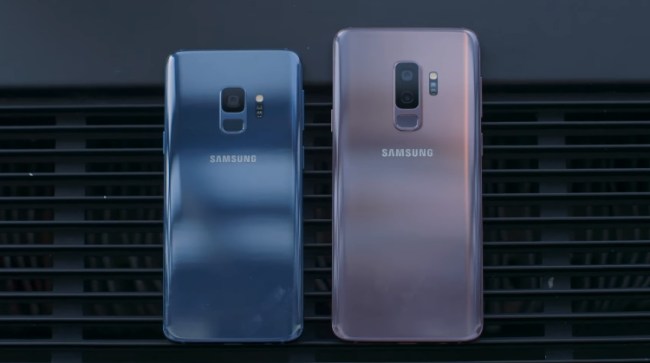 Samsung finally unveiled the Galaxy S9 and the official specs, price, and release date were announced. Samsung’s latest flagship smartphone aesthetically appears much like its predecessor, the Galaxy S8. The handset retains the USB-C charging port, a headphone jack, and waterproofing. The big upgrade on the S9 and the S9 Plus is the new camera.

The rear camera still has 12 megapixels as did the S8 and S7, but the S9 has a new variable aperture that can capture images at f/1.5 or f/2.4 for daylight. This is an exciting new feature that will allow the S9 camera to shoot in extremely low light and Samsung says it will allow 28% more light. The rear cameras continue to support optical image stabilization (OIS) which helps reduce blur in photos and shaky videos. The front-facing camera continues to shoot with 8 megapixels and has a new portrait mode much like Apple’s iPhone X that Samsung calls “selfie focus” that blurs the background to bring attention to your face. The Galaxy S9’s slow-mo video shoots at a peak of 960 fps, meaning that 0.2 seconds of recorded video becomes six seconds of playback.

The new S9 has the same 3,000mAh battery, but the S9’s new Snapdragon 845 chip will run more efficiently and increase battery length. The S9 Plus has a 3,500mAH battery to power its bigger screen. The S9 has a 5.8-inch screen and the Sp Plus has a 6.2-inch screen. The 845 chipset runs 25% faster than the older 835 processor. The S9 will have dual speakers on the top and bottom of the handset that will make the new handset 40% louder than the S8. The fingerprint reader still isn’t embedded in the display, but Samsung did make a correction and move the scanner away from the rear camera.

Trade-in deals:
Verizon – $100-$350 off the S9 or S9 Plus on an installment plan and trade-in a working phone in good condition. To get a maximum discount it must be a Galaxy S8, iPhone 8, or newer handset.

Sprint – The company is offering up to $350 off with an eligible trade-in, but doesn’t list the eligible phones.