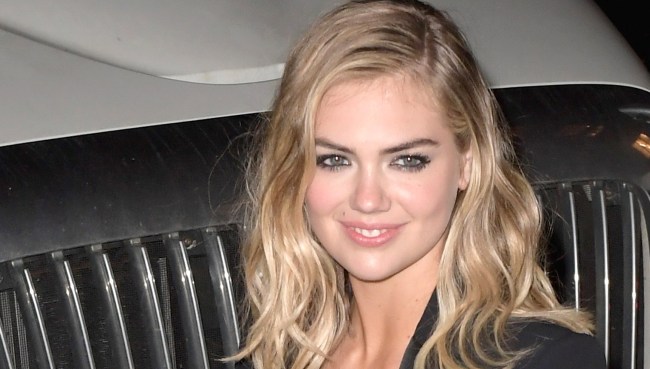 You know how every December Love magazine releases a new video each day until Christmas (and usually several days after), featuring famous women – mostly models? Sure you do. And if not, you do now.

Anyway, this year has been no different as so far Love magazine has put out videos starring such luminaries as Emily Ratajkowski, Kendall Jenner, Madison Beer, Gigi Hadid and her sister Bella, Hailey Baldwin, Stella Maxwell, and many more.

December 19th was, you guessed it, DAY 19 for what they call their “advent calendar” of videos. The star of Tuesday’s video was none other than Sports Illustrated swimsuit superstar and recently married model, Kate Upton. (Or is it Kate Verlander now? I’m going to need some clarification on this at some point.)

Now I don’t know if Upton actually plays tennis or not. And after watching the video, I still don’t know. Because while she does appear to have a decent backhand, I am pretty sure they just got one good shot of it and looped it in a couple of different times.

Upton is quoted at the end of the video, saying, “Love advent is a great Katie grand tradition. It’s silly and fun, and I love shoots where I don’t have to take myself too seriously.”

So then I take it the SI Swimsuit Issue is not one of those shoots.

Check out the entire super bizarre video below and see if you can figure out what the heck is going on.

Wow, huh? Last year’s video made so much more sense. Here are some clips from some of Love’s other “advent” videos. (They’re all VERY weird, because, you know… fashion.)

🎄On the 3rd day of Christmas my true #LOVEADVENT gave to me @emrata’s amazing polemic on female empowerment. “To me, female sexuality and sexiness, no matter how conditioned it may be by a patriarchal ideal, can be incredibly empowering for a woman if she feels it is empowering to her. The way I dress, act, flirt, dance, have sex – those are my decisions and they shouldn't be impacted by men. Being sexy is fun and I like it. I should never have to apologize for that. My life is on my terms and if I feel like putting on sexy underwear, it’s for me. Personal choice is the core ideal in my concept of feminism. Katie directed us to say ‘Stay Strong’ at the end of each video and I think it's a message from one woman to another. You're watching a video of a girl grinding in lingerie or whatever else and she is looking into the camera at the end saying, ‘you do you, however YOU want to, fuck the rest’. In the wake of the Harvey fallout and women coming forward with incredible amounts of sexual harassment cases, I have been so disappointed to hear women talk about "modesty" and "our responsibility" as if we need to, yet again, adjust to make it "easier" for the rest of the world. I'm tired of having to consider how I might be perceived by men if I wear the short skirt or post a sexy Instagram. I want to do what I want to do. Feminism isn't about adjusting, it's about freedom and choice. Do you think viewers will understand that, given the current wider conversation about the sexual objectification of women? why or why not? What are the risks? This is something I've battled with personally and publicly. I've had men comment on sexy images of me online and say "this is empowering to you? Ha! I just masturbated to it so hope you feel good about yourself!" I guess that's the way people can react, which ironically, ultimately serves my point. I don't care about your reaction or what you do with my expression of self. In fact, it has nothing to do with you at all and that's the point-which is why it feels good. Ultimately, if a woman wants to wear a burka or nothing at all, it's great if it's what she wants and feels good about.”💥#STAYSTRONG

⭐️On the 4th day of Christmas, the wonderful @kendalljenner plays the role of both Rocky Balboa and his wife Adrian 👊🥊 #STAYSTRONG “When you get asked to shoot the advent calendar, it’s highly flattering. It’s a chance to have fun and embrace a strong self and always a good time,” says Kendall, on being a part of #LOVEADVENT.⭐️ Link in bio to full film. @coach Directed by me Fashion Editor @sallylyndley Make-up @hungvanngo Hair @cameronjon Casting @bitton and @twodadstwokids Music @nathangregorywilkins and @richardxbm DOP @hashtaghankoff Production @serlinassociates Post Production @millchannel and @millbeautychannel @kateowenedit

🎄💥Kicking off the 6th day of #LOVEADVENT, is @sarasampaio. “I love the element of surprise that you don’t know what you’re going to get the next day. It’s always fun theme, and I love doing video and motion so you get to be a little of an actress. I loved that this year was about sports, and I did karate for 8 years growing up so it was really cool being able to use that in my own work now!” 🥋💪🏼#STAYSTRONG @marcbeauty Director @philpoynter Fashion Editor @sallylyndley Make-up @alice___lane Hair @benskervin Casting @bitton and @twodadstwokids Music @nathangregorywilkins and @richardxbm DOP @hashtaghankoff Production @serlinassociates Post Production @millchannel and @millbeautychannel

🎄Day 15 is stretching day with the wonderful @winnieharlow. #STAYSTRONG. "This is my first year shooting the love advent calendar. I probably watched every video from last year’s calendar just wishing that I could be a part of it and admiring the sexiness of each girl casted. When I got the call to do it this year I screamed. It was so surreal to be shooting it! I told everyone on set to forgive me if I was acting different on set because I really wanted to fully submerge myself into this sex pot character. I requested a bit of tequila so i could get more limber and we killed it. I felt like I was in my very own music video. My 9 year old self always wanted to be Britney Spears and I think that dream has official been fulfilled! Phil Poynter was amazing! He helped me think of what to work out I wanted to portray, what sexy poses to do.. I think he even roared hahaha! I fed off all the energy in the room and Phil’s passion. I’m dying to see it!" Says Winnie on being a part of #LOVEADVENT. 😍💪Link in bio to full film @agentprovocateur @marcbeauty Director @philpoynter Fashion Editor @sallylyndley Make-up @alice___lane Hair @benskervin Casting @bitton and @twodadstwokids Music @nathangregorywilkins and @richardxbm DOP @hashtaghankoff Production @serlinassociates Post Production @millchannel and @millbeautychannel

✨Day 12 of #LOVEADVENT is the gorgeous @realbarbarapalvin. “Shooting with Love Magazine during the holiday season is just as exciting as the season itself. The concepts are always very creative, I’m always waiting to work with the Magazine the way I wait for Christmas to come. You never know what they will surprise you with!” 👀🔥 Link in bio to full film. #STAYSTRONG @burberry Director @philpoynter Fashion Editor @sallylyndley Make-up @alice___lane Hair @benskervin Casting @bitton and @twodadstwokids Music @nathangregorywilkins and @richardxbm DOP @hashtaghankoff Production @serlinassociates Post Production @millchannel and @millbeautychannel nails @rockstarnailgrl