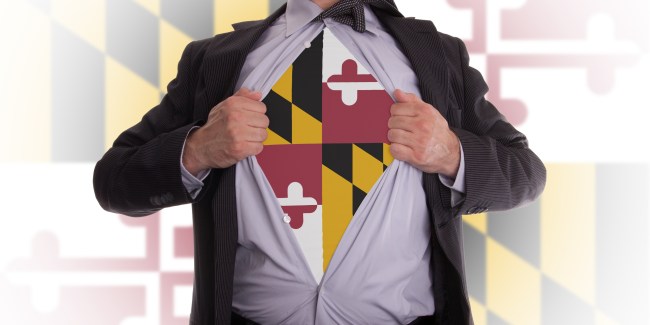 Asphyxiating yourself with a piss rag is better than crossing The Bridge on summer weekends
And if you have to ask what bridge I’m talking about then there’s nothing left for you here in this list.

Ocean City took at least one summer of your life that you’ll ever get back
You consciously uprooted your entire lifestyle to live in this toxin-drenched wasteland that reeks of crabs and carcinogens. This place ate your soul for three months of your life and you loved every second of it. A large chunk of your psyche never really left.

Crew socks are an integral part of your everyday wardrobe
You’ll literally wear them for two weeks straight because you wouldn’t be caught dead in that old pair of ankle socks left in your drawer from middle school. They’re comfortable and make you look like an athlete. (But we’re all phonies deep down.)

You’re a geography expert
Well, you’re not. But you do know one very important thing that idiot tourists always get wrong: Baltimore is not the goddamn state capital.

All turtles are referred to as Terrapins
It’s just easier that way! No matter how shitty UMd sports are.

You sprinkle Old Bay on your breakfast
Bagels. Pancakes. Cap’n Crunch. Whatever. You start the day off right with a nutritious breakfast that features Baltimore kick.

Post-activity dips are what you look forward to at the end of the day
Whether it’s after practice or a grueling day of sitting through bio professors talk about Spanish, nothing beats packing a lip and kickin’ it with your buddies. Only the good stuff, though.

You played lacrosse even if you didn’t play lacrosse
You owned a lacrosse stick but never played a game. All of your friends played lacrosse at some point, but your parents probably made you play baseball instead. Thanks Mom and Dad. Concerted cultivation my ass.

The name “Assawoman” does not amuse you anymore
“OMG HE SAID ASSAWOMAN!” Yes, this woman’s ass lends its name to the boating, tubing, and jetskiing capital of the eastern shore. There’s nothing funny about this. Jetskiing isn’t funny. It’s strictly business.

You know exactly how “Worcester” is pronounced
But we usually choose to butcher the pronunciation anyway so people—even those who know how to say it—actually know what the hell your talking about. (For the record, it’s “wooster.”)

$2 Natty Bohs at Sliders keep your world in orbit
If you’re going to a Friday night O’s game and ran out of Gatorade and Burnett’s to chug on the light rail down to Camden, you walk your semi-drunk ass ten feet away from the stadium and end up at Sliders, an orange hole-in-the-wall situated on Washington Boulevard. This deal is relentlessly amazing.

Unless you want to pay $12 for a beer cup with the O’s schedule on it. But I’d rather just be drunk for cheap and get the schedule on the Internet.

You become a condescending prick when discussing crab size, taste, meat richness, and Old Bay dosage. (Only when your parents are buying, though. Christ on a corndog, these four-legged bastards are way outside your bar-backing budget.)

Federal Hill is your stomping grounds
Once you turned 21, you heard about Stalking Horse and Porters’ “100 different kinds of draught beers.” That’s not a direct quote from the restaurants—it’s from your dumbass older friends who lied about their big city lives, filled with women and freshly carbonated IPAs.

Some establishments do have great beer selections, though, so heading toward Light Street or Cross Street and going down swinging ain’t the worst decision you’ve made.

H2O was the bee’s knees during your formative years
Ah, yes. So many eighth-grade memories stem from this notoriously sweaty trollhole for underage OC shitheads. My friend once stole a flask filled with Everclear from this place. Talk about a middle school dance on steroids.

These people suck. Badly. They’re the ones who scream “HAHN” or “HOOOON” like they are metaphorically shitting on every tin of Old Bay that’s ever been produced.

Don’t ever shit on Old Bay. Ever.

Long-sleeved t-shirts are worn regardless of the weather
You roll them up when it gets hot out. You rock the sleeves down when it’s a little chilly and you’re walking across campus. Regardless, you know it looks good.

The National Aquarium will never cease to be cool
It was awesome when you were nine years old on your elementary field trip, and it’s still awesome now. And you’re not ashamed to go on Fridays after 5 p.m. for that whopping $12 discount.

You know the Redskins have the weakest fan base
Not just compared to Baltimore, but any NFL team. And you tell them that the Battle of the Beltway was won long ago.