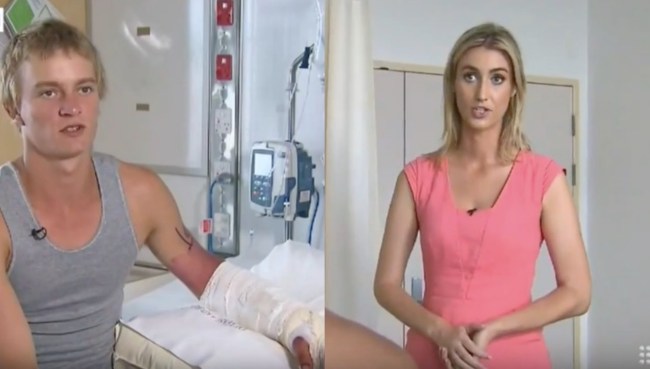 It all started with this cranked up Aussie bloke spitting hot nonsense to a cute British tourist in hopes of winning her over. His pickup line was something along the lines of ‘tourists are more likely to get attacked by crocodiles than native Australians’. Whether or not his claim is true remains to be seen because this bro proved is crocodiles will attack when provoked.

So this drunk Aussie jumps in the water and swims with the crocodile to prove his outlandish point, then the crocodile immediately sinks its teeth into his arm and takes him under. Instead of panicking, the dude first punched the croc in the snout and then gouged the crocodile in the eyeballs, and somehow survived.

Not only did this Aussie bro get out of there with his life but he also got the girl, as you can see in the Interview. From his hospital bed, he also gave a pretty legendary TV interview and had some pretty choice responses for the reporter asking him about his current reputation as the dumbest bloke in all of Australiacro.

Personally, I respect his hustle. I don’t fuck with crocodiles. Alligators don’t worry me much at all, but crocodiles are much more vicious when provoked and they’re even keen to attack when not provoked. This bro put his life in danger all to make it with some British tourist chick, and I think we should respect the effort.

Shout out to reader S.Gibson for sending this video my way! And if you’ve got any content you think should be featured here on BroBible don’t hesitate to send it to us by filling out the ‘TIP OFF‘ form!