Saturdays Are For The Snips: ‘Brosectomy’ Vasectomy Parties Are The Next Big Trend In Hanging Out With Your Boys

Yesterday the Wall Street Journal published a trend piece that made me gasp and giggle when they Tweeted it to the world. It deserves to be on the radar of every self-described Bro. The hed and dek, gentlemen:

It’s a Vasectomy Party! Snips, Chips and Dips With Your Closest Friends

Pals willing to spend a few thousand dollars are getting together for ‘brosectomies’ at clinics that look more like club lounges; ‘I guess it’s from the alcohol, but we had such a great time’

'Brosectomies' are a thing. Pals get together at clinics that look more like club lounges to get drunk and snipped https://t.co/LbKLybct24

According to the Wall Street Journal, groups of dudes are now getting together to have vasectomies a.k.a “brosectomies” as a form of permanent birth control. This type of group bonding involves all the necessities  for crackin’ open a couple cold ones with the boys, (booze, manly steak dinners, etc) except it ends with everyone holding bags of frozen peas on their scrotum. BECAUSE SATURDAYS ARE FOR THE SNIPS:

Businessmen Rob Ferretti and Jeb Lopez skipped work for a day of booze, steaks and prescription drugs at a hideaway outside Washington, D.C.

The two pals, married with children, made a convivial—and somewhat vulgar—video (watch it above) as they drank and giggled away the hours before heading home. Neither man could drive afterward, but their wives were remarkably supportive.

Mr. Ferretti, 36 years old, and Mr. Lopez, 44, had enjoyed themselves under the supervision of a doctor for what some are calling a brosectomy—a vasectomy with friends in a cushy setting of couches, snacks, big-screen TV, and in some clinics, top-shelf liquor.

“We thought it was going to be painful,” said Mr. Lopez, who described the procedure as feeling like the sting of a rubber band. “After that, we were just laughing, I guess it’s from the alcohol, but we had such a great time.”

Crackin’ open a couple cuts in the scrotum with the boys, amirite?

There’s some thought behind why dudes like to have vasectomies in groups, besides the whole no-more-kids thing. It’s like when your boy Greg said he’d eat the goldfish, so naturally your boy Chad had to one-up him by eating two goldfish between two pieces of Wonder bread. via:

Having vasectomies together provides comfort in numbers, Dr. Turek said. One group, friends since college, had vasectomies together, and they “took fewer pain pills, felt better faster and returned to work earlier than the average, go-it-alone-out-on-the-plank, tube-tied patient,” he wrote on his blog last year.

Urologist Ernest Sussman, of Las Vegas Vasectomy in Nevada, said pairs of men arrive together for the procedure a few times a year, usually visitors attending business conferences or watching sporting events together.

“It’s almost like a fraternity mentality, where one guy says they may do it,” Dr. Sussman said, piquing the interest of “the other guys who’ve been contemplating it. All of a sudden they have the energy or courage.”

If you’re thinking about getting sniped with your best Bro, maybe wait until a Saturday during college football season or during March Madness:

Other clinics advertise on radio and social media that the benefits of vasectomies reach beyond family planning. The pitch: Doctor’s orders are a perfect excuse to watch the NCAA basketball tournament in its entirety.

“Ready for some wife-approved couch time? Have your vasectomy on a Thursday or Friday. Then you can recover over the weekend while watching some great games!” said a Urology of Indiana advertisement ahead of this year’s March Madness.

Ads by the practice, based in Greenwood, Ind., seem to work, said Chief Operations Officer Charles Dotson, who saw a surge in March business.

“This a procedure that’s going to require them to be down for a couple of days, limited mobility, they’re going to probably be doing that anyway if they’re watching basketball all weekend, it just becomes an easy conversation to have with the other half,” Mr. Dotson said.

The Internet, of course, has some thoughts. 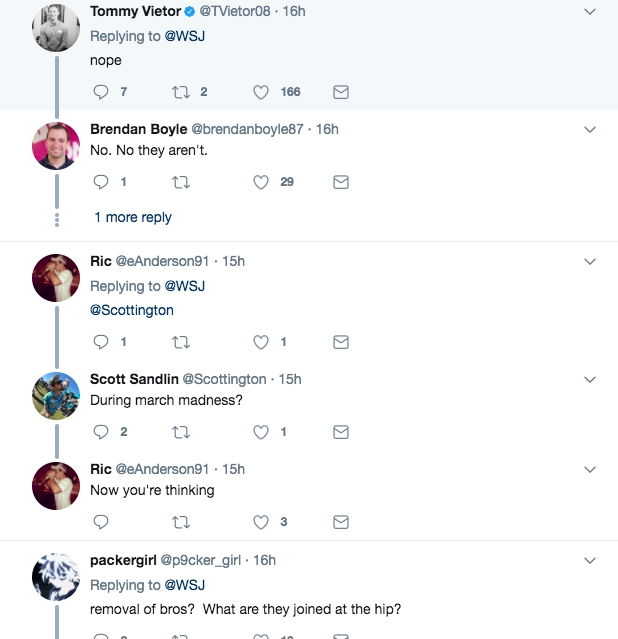